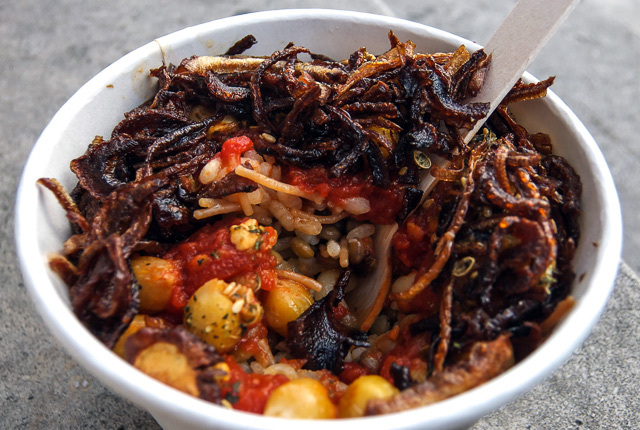 Koshari is a Middle Eastern street food, hugely popular in Egypt and considered by some the food that powered Egypt's revolution, when it was scoffed by the masses in Tahrir Square. Yet despite Britain's love affair with Middle Eastern dishes such as falafel and shakshuka, it's almost unknown in this country.

Such anonymity is likely to change, if this new cafe is anything to go by. Founded by the writer Anissa Helou, whom we interviewed earlier this year, Koshari Street on St Martin's Lane, Covent Garden dishes out bowl after the bowl of the stuff (Atkins dieters look away now): hefty scoops of rice, lentils, vermicelli and macaroni, topped with caramelised onions, hot sauce, chickpeas and doqqa, a mixture of spices including coriander seed and peanuts. It looks and tastes great: the crunch of the onions contrasts with the softness of the chewier base, with the sauce, available in three levels of piquancy, lending it additional bite. Portions are generous; a medium-sized bowl (pictured) cost £4.50, while a larger version is £6.50, and they also serve soup and side dishes including tabbouleh.

Criticisms? There aren't many; on our one visit service was a little slow, although that's to be expected from a new restaurant, and it was more than made up for by the offer of a complimentary soft drink. The cafe itself, split between the preparation area on one side and a row of  stools for customers on the other, is a little cramped and doesn't reward a lengthy, sit-down meal, but for a grab-and-go lunch option it's a great addition to the area.

Koshari Street is at 56 St Martin's Lane, WC2N 4EA. Read our interview with the restaurant's founder.