Even Stillness...Ready Meals And Routine Brought To Soho Stage

By Londonist Last edited 96 months ago
Londonist Even Stillness...Ready Meals And Routine Brought To Soho Stage 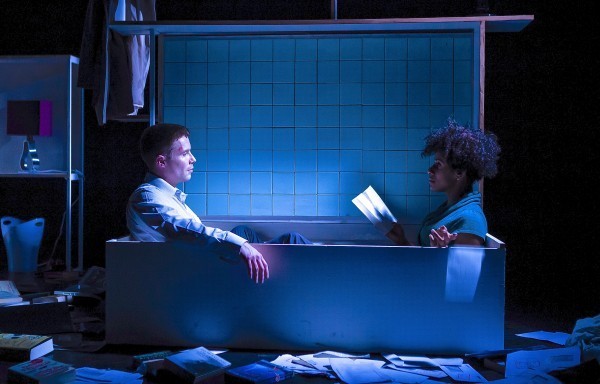 Alarm clocks. Emails. Texts. Phone-calls. White noise from the TV. The kettle switching on, the kettle switching off. These are all the things that punctuate the duration of Even Stillness Breathes Softly Against a Brick Wall (bloody hell, what a mouthful) to the point that you can practically feel the stress radiating off an audience who arrived at the theatre, only to find that the orchestrations of every-day life had followed them in.

Even Stillness (let’s call it that for sanity’s sake) is about a nameless couple who have followed the steps that modern life demands ("I’m twenty seven…My mother is proud of me. I can abide my job and I trust my friends. I am set for life" says the woman at one point), only to find themselves drowning in routine and meaninglessness.

At points the script (by Brad Birch) is brilliant, the audience nodding agreement at the similarities to their own lives, as the actors go through the motions of waking up, getting dressed, commuting, then getting home, watching TV, eating ready-meals and worrying about money. It’s always a congratulatory feat for someone to remain on stage and chatter for the entirety of a play (and chatter they do for it’s very wordy), so for this the actors must be commended.

It all goes slightly downhill, though, when the characters snap and turn for the worse, which at first is entertaining but quickly becomes grinding and very unrealistic. There’s a constant presence of a nameless war throughout the play, which becomes somewhat tenuous, especially at a sequence where the couple open a bag of bills to the sound of bombs and screaming (slightly overdramatic to say the least). So: a little sensationalist at times, but watchable all the same. Don't take any young ears, though, as swearing is abundant and there's even a bit of onstage sex.

Even Stillness Breathes Softly Against a Brick Wall is runs at Soho Theatre until 14 June. Londonist saw this play on a complimentary press ticket.