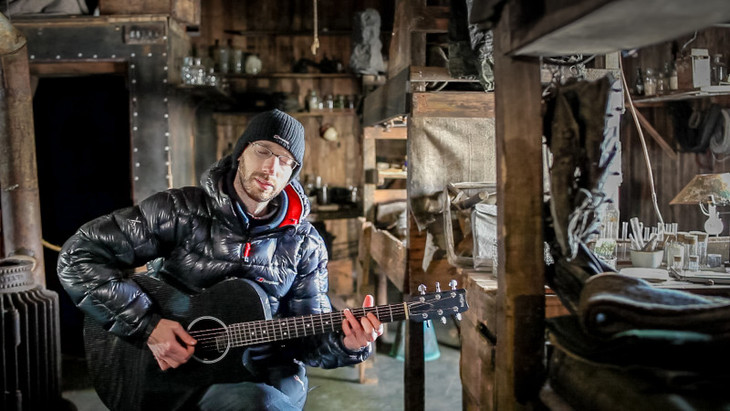 To be honest, Jake Wilson doesn't look like a swarthy polar explorer, but he clearly doesn't lack a sense of derring-do. The respected south London folk singer has just completed a trek to sing in Captain Scott's cabin in the Antarctic. This is not an obvious rite of passage for musicians, but rather a logical-if-bonkers follow-on from Jake's 2012 album All's Well, which he produced to commemorate the centenary of Scott's doomed expedition.

The album is hauntingly poignant, goose-bump stuff, featuring one song for each of the five explorers on that expedition. Jake spent a lot of time reading the letters of Wilson, Bowers, Oates, Evans and Scott: one feels that both the CD and the subsequent trek became kind of personal, a pilgrimage.

The South Pole is not the kind of place where you can just whip out your fender stratocaster (or whatever) and play a little ditty. Jake had to find a graphite guitar to withstand the harsh climate. And then he practised playing the thing in shop coldrooms and freezers the length and breadth of Rye Lane, Peckham. Thermals were involved. And gloves.

But he did it. He played all five songs, at minus 13°C, in various spots around the hut (which is spookily just as it was left), and it was filmed by his equally adventurous cameraman Colin Rogal. You can see one of the songs performed here and Jake will be talking about his voyage on Saturday Live on Radio 4 tomorrow morning at 9am.