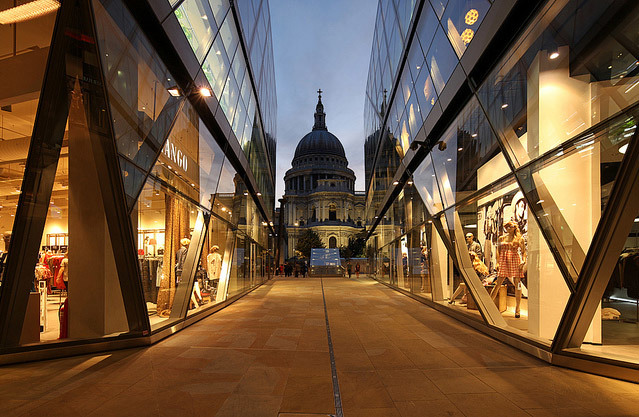 When it opened in 2011, One New Changes's operators made much of the shopping mall's potential to attract people to the Square Mile on weekends. It hasn't happened: the area's still a ghost town on Saturdays and Sundays, much to the enjoyment of residents and explorers of the City's myriad back alleys.

Going back to the area's roots as London's main produce market, ONC's proprietors are starting a food market every Saturday from 1 June. Producers including Beas of Bloomsbury and Blue Mountain Coffee will be on hand selling their goods (here's the full list) while "celebrity chef and home-grown London talent" Gizzi Erskine will be glad-handing the masses and signing copies of her cookbook.

Over in London's other financial district, a new farmer's market at Canary Wharf will launch on 8 June.

But will either be enough to tempt food foragers away from Borough Market?

Photo of One New Change by David Bank