Like A John Hughes High School Movie, With Robots

By Londonist Last edited 96 months ago
Londonist Like A John Hughes High School Movie, With Robots 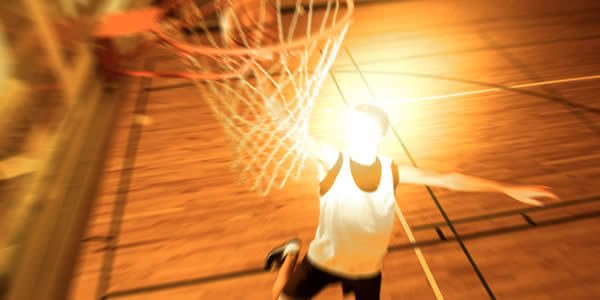 The finger-breakingly titled Nothing is the End of the World (Except for the End of the World) was written originally for a group of high school kids in America, so it's perhaps not surprising to find the Finborough Theatre decked out like a gym from a 1980s high school movie, albeit an angular and broken one. The audience, split into two groups on either side of the stage like spectators at a basketball game, watch the action unfold from a position of omniscience. It feels appropriate, given the reality-show framing device.

The story broadly follows a pair of teenage robots attending an American high school, walking a barely-sketched line between "thought-provoking science fiction" and "slightly weird John Hughes movie". Their moves are tracked by the overseers of aforementioned framing device, represented by a disembodied voice and an almost divine light. When the light is on the players, you learn, they are being watched, and they know they are being watched, and this forces a switch between the "on-" and "off-camera" personas of all of the characters.

But it's quite simply done, which is the impressive thing. Rather than mulling over the wider implications of the story, playwright Bekah Brunsetter closes in on a macro level to focus instead on the personal interactions between all these characters who never, admittedly, stray very far from their archetypes. Here's the Type A student body president; her basketball-slinging boyfriend; an anxiety-ridden wallflower; etc. You know what you're getting, and as a fan of that kind of thing Londonist appreciated the setup greatly.

Problems: some clunky exposition, some weird dialogue, wasted opportunities towards the end of the story which we are obviously not going to spoil for you here. Overall, it's a slick piece of work, funny enough to glide smoothly over its flaws.

The thing is, it's highly enjoyable but not particularly thought-provoking. It's a movie playing out live in front of you. Yes, there are some incongruous dance-y, stage-y transitions that feel a little bit odd given how sudden they are, but otherwise there's not much to distance it from, again, a John Hughes film with robots. That's not necessarily a bad thing; an argument can certainly be drawn out here regarding the accessibility of theatre and what expectations and expertise a play can reasonably expect from its audience. It's an alternative to Star Trek Into Darkness, at any rate, and it's strange that that isn't something you can say about very many plays. You wouldn't recommend A Midsummer Night's Dream to someone who already saw The Hangover Part III, for example. And maybe it should be something you can say about the medium.

The bulk of Nothing is the End of the World (Except for the End of the World)'s 90-minute running time is intellectually unchallenging, but as a whole it's a lot of fun and at times even stimulating. None of this is supposed to be a criticism; Londonist enjoyed the mix of high school antics and grounded sci-fi a great deal.