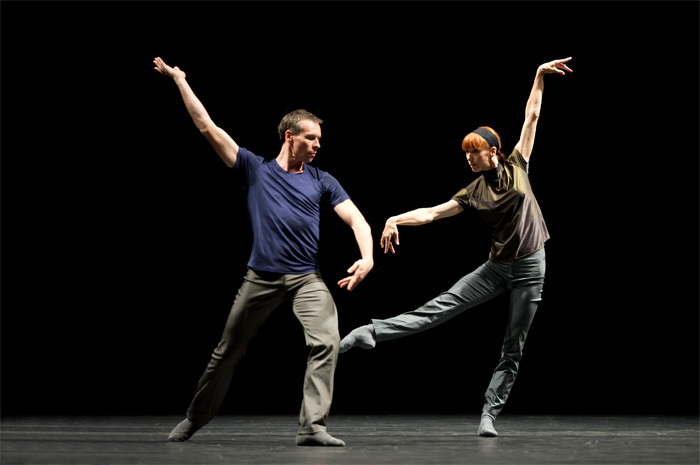 Famed for her long, limber legs, flaming auburn hair and uncompromising standards of excellence, Sylvie Guillem is the closest thing the dance world has to a rock star. Not a mere passing twinkle, either, but the kind of star that has been burning a hole in the firmament for three decades, recreating classical roles in her own image and striking out into challenging contemporary territory at an age when most primas are hanging up their pointe shoes and taking a well-earned rest. 6,000 Miles Away (titled in tribute to the Tohoku earthquake and tsunami that took place while the programme was being rehearsed in 2011) is a welcome return to Sadler's Wells for the woman regularly regarded as the outstanding female dancer of her generation.

Two of the evening's three pieces were created for Guillem by her friends and regular collaborators William Forsythe and Mats Ek. Forsythe's Rearray is the more conspicuously post-modern of the two, an abstract, academic collision of classical form and contrary contemporary presentation. Everything about the staging seems designed to distract and perplex the audience: the lighting is wayward, flicking on and off mid-phrase and plunging from dazzling brightness to squinty darkness. The music is a disconcerting combination of backward strings and detuned piano; the movement puts the poised arabesques and beaten jumps of classical ballet through the blender and mashes it up with dislocated hips and sudden flurries of gesture. Rearray seems to pit Guillem and her partner Massimo Murru against one another rather than bringing them together. The two never connect and perform only momentary snatches in unison. Fans of Forsythe's rigorous, cerebral style will enjoy this challenging work; those who aren't, less so.

If Guillem's formidable technique and capacity for challenge are shown off to their best advantage in Rearray, Swedish choreographer Mats Ek allows the dancer to demonstrate her sometimes-overlooked talent for character work in Bye. Guillem appears first as an oversized, sepia-tinted eye peering out at the audience from a white box at the back of the stage. Video projection and cleverly timed choreography conjure up the illusion that this is a door to Guillem's memories, or a magical Looking-Glass world somewhere offstage that contains friends, family and even a dog.

Appearing first in a dowdy cardigan and flat shoes, Guillem's character gradually regresses through memories of a life well-spent, leaping and spinning playfully around the stage to the boogie-woogie stylings of Beethoven's Op. 111 Arietta, shedding layers to reveal an eye-socking purple blouse and mustard skirt that Tom and Lorenzo could devote a whole blog to. Like the iconoclast that she is, Guillem ends the piece defiantly standing on her head as more and more figures crowd into the upstage box to beckon her back. Finally she submits and joins them in the upright world — but not, we sense, for long. Cute and characterful, Bye is the undoubted crowdpleaser of the night.

The programme is headed by a duet for former NDT dancers Aurélie Cayla and Lukas Timmulak. Created in 2002 by Jiří Kylián, 27'52" begins with the dancers playing and rewinding rapid, punchy gestural sequences to a squelchy electronic score, moves into a supple, languid duet which both perform topless, and ends with both dancers wrapped in the very lino dance flooring that they perform on. Both dancers perform beautifully, but the three sections of the piece seem disjointed and unrelated (perhaps not helped by being edited down to a shorter, 20-minute running time) and this is not Kylián at his shining best.

The evening is, in any case, all about its flame-haired star. We know that Guillem is a performer of astonishing technical prowess and lucid expression. We know that she is an artist always willing to take creative risks. Returning to Sadler's after a lengthy worldwide tour,  the contrasting works of 6,000 Miles Away also reveal her as a dancer of unrivalled physical courage.

Londonist saw this show on a complimentary review ticket.