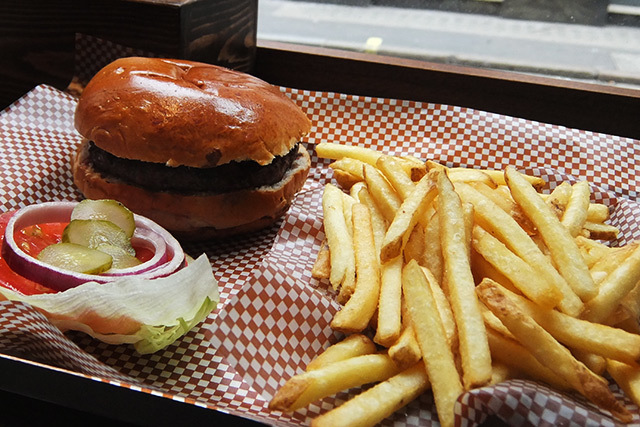 A Beirut-based restaurant that steers clear of traditional Lebanese cuisine to offer a very American dining experience, BRGR.Co opened its first foreign outlet in December to broadly negative reviews. Now that it's had a few months to bed in, have things improved?

We chose the 6oz 'tender blend' and a side of chips from the menu. Whilst waiting for our food to arrive we perused the placemat, which is covered in verbose text about the art and science of "BRGROLOGY", which apparently involves the "study of all things BRGR" and takes up to eight years to master (a PhD in the subject requiring twice as long).

After such lofty promises, it was a little surprising to see the curiously flat burger presented to us. The meat was secured between a sorry-looking brioche with a patina of grease brushed on top and what looked like the letter 'H' etched into it. Beside it was an arrangement of salad. The burger didn't taste bad, though nor did it taste particularly great; the meat was decent enough but without a huge amount of flavour, which made all the fancy menu-talk we'd consumed beforehand seem redundant.

The crunchy chips were poor comparable to the sort you'd find in McDonalds but even saltier. They'd also been heated up so much that we'd finished the burger before the chips were even cool enough to touch.

BRGR.co isn't really too bad. The staff were unfailingly polite, and the atmosphere pleasant. But it's opened at a time of fierce competition amongst London's burger-slingers. When you've got the excellent Honest Burgers and Slider Bar within a few minutes walk, or the likes of MeatLiquor and Patty & Bun a little further afield, it's difficult to recommend a so-so experience like this.

A burger + fries (no drink) came to around £11 for one, including service charge.