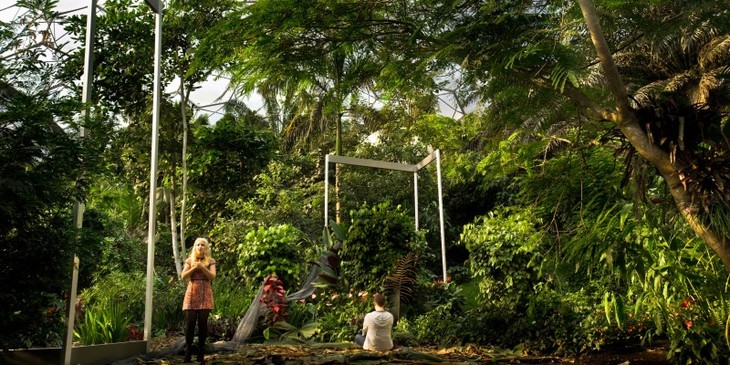 Michael van der Aa’s new opera, Sunken Garden, may be like few others ever seen. Described by its composer and director as an ‘occult-mystery film opera’ it is a genre defying phenomenon that fuses live singers and orchestra with pre-recorded film and sounds.

The plot tells of the sudden disappearance of individuals who find themselves in a limbo between life and death, a walled garden where guilt and grief cannot enter. In line with this, it is the point at which we witness this lavish paradise on a huge screen that the staging hits its greatest heights. With the audience donning 3D glasses, lush foliage appears to burst out from its surface while water seems to splash just inches from their faces. The singers on stage interact so well with those ‘in’ the screen that we soon forget they are in different realms, or that the latter are not actually there at all.

Although the opera’s themes of guilt, afterlife, mortality, permanence and evanescence are ubiquitous, the manner in which they are explored in this complex yet slightly confusing creation makes it hard to feel that it is really saying anything to us about our lives. This said, the way that the music and film work together to create, for example, a sense of overload when characters escape the garden is highly innovative. Van der Aa’s music is also interesting, especially in the way that it fuses ‘opera’ with ’electronica’.

At its best Sunken Garden is visually stunning, and the performances of Roderick Williams, Katherine Manley and Claron McFadden as the live singers, and Jonathan McGovern and Kate Miller-Heidke who appear on screen, are strong. It does, however, feel as if the work tries to justify a dramatic unwieldiness that neither opera nor film alone would tolerate, simply on the grounds that it is a boundary crossing piece.

Londonist received a complimentary ticket from the ENO press team.

Photo: Now, imagine this image the size of a cinema screen and in 3D! © Joost Rietdijk.