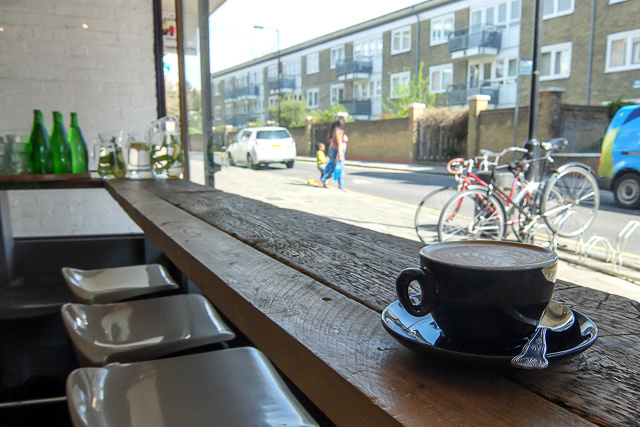 Hoxton Street should probably better known, and not only for the fact that it's where the video for The Verve's Bittersweet Symphony was shot. Despite running through the middle of Hoxton it has largely escaped the changes that have swept through the area in the past 15 years. That may no longer be the case, if the appearance of coffee shops like Embassy East are anything to go by.

At the northern end of the street, in a unit that formerly belonged to the Alternative Therapy Centre, Embassy East is owned by two former employees of Flat White, the Soho establishment arguably responsible for the ever-expanding number of great coffee shops in London. Inside, it's much as you'd expect from folk with that pedigree: exposed brick, a small kitchen area in the back, a simple menu (choose from one of three sizes for your coffee) and a wooden bench in the window. The coffee, from Workshop in Clerkenwell, is predictably great, and the cafe had a palpable buzz, filling up quickly on the Sunday morning we visited.

Most of the cafe's denizens were the type of folk you'd see at any other Shoreditch watering hole, a contrast from the  working-class types who live on the local estates. Whether the latter will be willing to fork out the cash for expensive, if lovingly prepared, coffee is debatable, but Hoxton Street's relative anonymity is slowly coming to an end.

Disclaimer: We review anonymously and pay for all our meals / drinks.