Laurencia At London Coliseum: Firework Dancers Catapulting Around The Stage 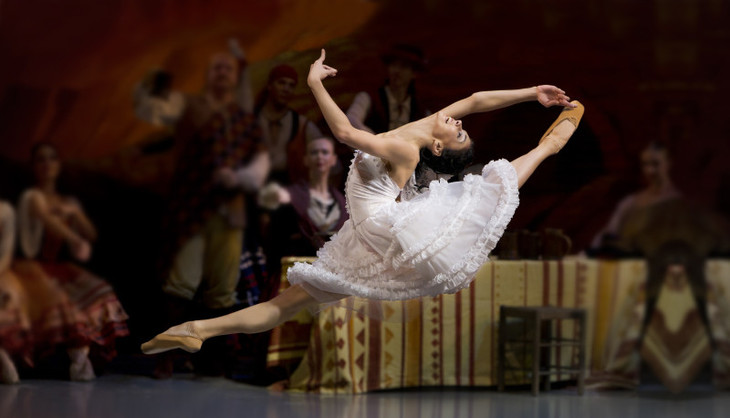 Ballet stars Natalia Osipova and Ivan Vasiliev, known affectionately as 'Osiliev', are storming London with their passion and prowess. Last week, we reviewed them in The Mikhailovsky Ballet's Giselle, where Osipova was the epitome of grace and beauty and Vasiliev showed some superb dramatic acting. Now performing more bravura works (Don Quixote at the weekend and Laurencia yesterday and this evening), the couple make even the most talented dancers appear restrained. They are like fireworks, catapulting themselves around the stage with boundless energy in the most astonishing array of leaps and spins.

The couple left the Bolshoi Ballet in 2011 to join the less well-known Mikhailovsky Ballet. They say this had nothing to do with money, but instead the freedom to perform a range of repertoire and make guest appearances around the world. There are disadvantages to this choice; the background corps de ballet who support them are much less proficient than at the Bolshoi, but Osiliev seem to be revelling in their decision, loving being centre-stage night after night in ballets they clearly enjoy dancing.

Laurencia is rarely performed in the UK, no doubt because of its utterly ridiculous story. (It is in effect a "rape-revenge" ballet as critic Sanjoy Roy pointed out on Twitter.) There is a loved-up couple, a moustached villain and peasant girls doing laundry — and with the exception of Sabina Yapparova's Pascula, very little choreography is worth watching aside from the lead duo.

Fortunately, Osiliev save this ballet. Osipova pirouettes at the speed of light only to stop suddenly into an extended balance and Vasiliev jumps miles off the ground, creating all manner of airborne poses. It is just a shame that at 80 minutes in length, Laurencia doesn't give its star couple more time to show off their skills.

Laurencia is at the London Coliseum tonight only. The Mikhailovsky Ballet then perform other works until 7 April. All tickets are available from the Coliseum website. Londonist received a complimentary ticket to review this performance.