Fireball Court: The Potted History Of A Vanished Alley

By Londonist Last edited 23 months ago
Londonist Fireball Court: The Potted History Of A Vanished Alley

If the streets are the veins of London, the courts and alleys have always been its capillaries. For centuries they were the vessels that circulated men, women, money and disease throughout the metropolis, though nowadays only a fraction of the population inhabit them.

Look hard enough and the ancient byways can still be found. Alleys such as Goodwin’s Court and Newman Passage exist in a delightful sclerosis, dirt clinging to bricks, windows and door frames that have stood for hundreds of years. Others, like Cobb’s Court near Ludgate Hill, seem only decades old, fresh-faced after their umpteenth reconstruction in a lifetime spanning centuries. The alleys are as varied and colourful as London’s inhabitants, with men and woman throughout the ages squeezing awkwardly past one another or promenading down them as space and inclination have allowed.

But as the topography of the capital has changed, many have been buried. The area north of Houndsditch was once a warren of courts and lanes, but today their former paths run through the lobbies, canteens and conference rooms of the immense office buildings that occupy the site. With the loss of these back streets London has been deprived of such striking names as Seven Steps Alley, Cock and Hoop Yard, Ball and Shears Court and Pease Porridge Alley.

But there is one whose name is particularly intriguing: Fireball Court. Formerly connecting what is now Cutler Street and Houndsditch, it was, according to the early 18th-century writer John Strype, not a bad place to live, especially compared to its nattily-named but distinctly dodgy neighbours, Shepherd and Dog Alley and Flower de Lis Court. Its name derives from the sign of the Fiery Ball, a house which stood at the site in the 16th century, whose existence is testified in the will of its former owner, Henry Elsing. The philanthropic landowner bequeathed the property to his son in July 1577 on the stipulation that a cart-load of coal be distributed yearly among the poor of the parish of St Dunstan in the West, by Fleet Street. 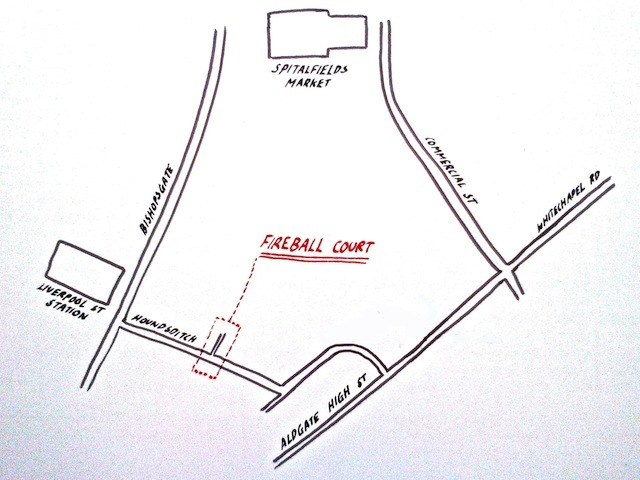 Despite its charitable origins, the inhabitants of Fireball Court were as prone as any to violent disagreements, many of which are commemorated in the Proceedings of the Old Bailey. On 28 August 1741, for example, William Cox of St Catherine's was indicted for grand larceny, having stolen an iron crow from a shop owner in East Smithfield. The artifact was spirited to Fireball Court, where it was sold and reworked into pestles, earning Cox a guilty verdict and a sentence of transportation. On 10 July 10 1811, Jones Michael was indicted for assaulting John Ellis and stealing the poor man’s watch. The defendant lived at Fireball Court with his landlady, Esther Levy and her daughter and, for the theft of a timepiece worth seven pounds, he too was transported.

Newspapers of the time also paint a somewhat insalubrious picture of Fireball Court. In 1853, the Lord Mayor of London himself presided over a case of poor sanitation in the alley. Mr Lewis Isaacs was accused of maintaining (or rather not maintaining) a common lodging house at number 5 "wholly unfit for human habitation". The case was prompted by the death of a young child on the premises. In 1866, another child, one-month-old John Kennedy, was found dead at 8 Fireball Court, having suffered an accidental injury to the head. Although both his parents were intoxicated at the time, they escaped punishment during the inquest.

Such cases reveal those incidental details of daily life which would otherwise be lost forever. We know, for instance, that by the mid-19th century the court had gas lighting. The wonderfully named Cornelius Girren, a paper-stainer and Fireball resident, noted the fact on 9 May 1859 during cross examination in a case against Margaret Connor. Cornelius accused the woman of murderously attacking him with a blade during a late-night brawl that took place in the court, which Alfred Goddard, a policeman giving evidence, intriguingly considered to be one of London's;s roughest. Witnesses attest to a rowdy gathering, 40 or 50 strong, in which a belligerent Cornelius appeared wearing nothing but his trousers. Testaments to Margaret’s innocence, however, seem to have prevailed upon the jury, as she was found not guilty, and thus spared the fate of the watch-snatcher and the iron thief.

In 1847 a National School was built at Number 7. It can be seen on the Ordinance Survey Map of 1873, on which Fireball Court is still marked. In the maps of 1894 and 1913 the school has seemingly expanded, though the court itself is no longer named. Despite its disappearance in cartography its survival into the early 20th century may be assumed by its inclusion in Henry A Harben's A Dictionary of London, published in 1918. This, however, is one of the last mentions of the little street while it was still extant, and soon, after more than 300 years as a nexus of life, crime and charity, Fireball Court had slipped quietly into history.

Today, the site is taken by a large 1980s office complex, with a branch of Pret and the Alice bar roughly marking the entrance to Fireball Court.