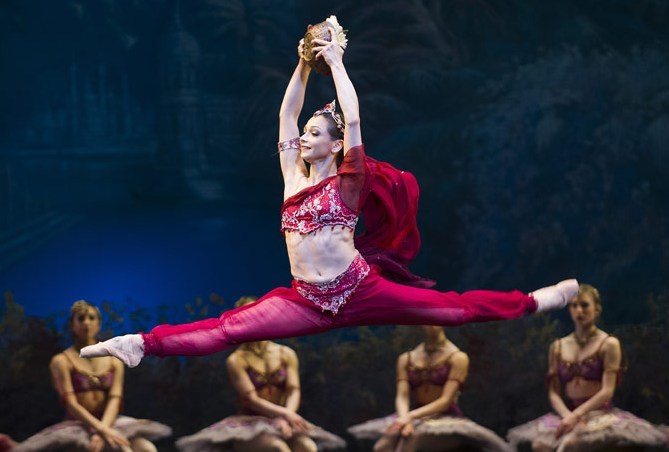 Created by the great ballet choreographer Marius Petipa in 1877, La Bayadère is perhaps the most opulent and exotic of classical ballets. The plot revolves around the forbidden love between sexy Prince Solor, slayer of tigers, and lithe, sensuous temple-dancer Nikiya (the titular bayadère). The pair's romance is further complicated by a lusty High Brahmin who desires Nikiya for himself, and the small complication of Solor's betrothal to beautiful princess Gamzatti. Within a few short scenes, the stage is set for a potboiling melodrama with added Eastern spice, an enduring favourite in the ballet canon.

Historical purists should probably look away, or at least swallow the ballet's plot with a large pinch of masala. La Bayadère reflects the 19th century's obsession with all things oriental, rather than its passion for exactitude. What Petipa brings us is a beautifully-framed, beautifully composed soap opera, replete with dancing maidens, leaping warriors and esoteric temple-dwellers scuttling about the sacred fire. Into this heady mix steps Nikiya, danced on opening night by Roberta Marquez (replacing an injured Alina Cojocaru). Dressed in sparkling white, she steps demurely into the circle of onlookers and captures the hearts of her onstage audience with a variation of coiling oriental langour. Supple and expressive, Marquez makes a fine replacement for Cojocaru in this outing, although many will have been slightly disappointed by the substitution.

Federico Bonelli dances Solor with youthful vigour and impetuosity — now swearing eternal love to Nikiya in a gorgeous, buoyant pas de deux, now captivated by the frosty beauty of his new fiancée. Marianela Núñez dances the complex Gamzatti with fearsome command — at first winsome, almost girlishly thrilled at thought of marriage to the manly Solor; then chilling in her certitude that Nikiya must die. The night belongs to Núñez, who glitters in the role with alternating rosy brightness and flashes of real menace.

The work is perhaps known to ballet-lovers for its mesmerising "Kingdom of the Shades" sequence in Act 2, in which Nikiya's ghost is multiplied into 24 identical ghostly figures. This scene requires extreme precision from the corps to sustain the illusion of one multiplied figure; a few wobbles aside, Friday's ensemble performance was beautifully executed.

Despite its high classicism, La Bayadère shares a portion of its DNA with Bollywood — colourful group dances, exotic poses and cod-oriental gestures, a love story thick with obstacle and drama.  If you're looking for gritty realism, wait for Kenneth MacMillan's Mayerling later this season, which serves up grit in spades. But if melodrama and pretty dancing in harem pants is more your thing, we can't think of a more satisfying ballet.

La Bayadère runs at the Royal Opera House until 22 May. More info.
Londonist saw this show on a complimentary review ticket