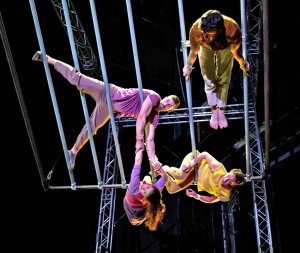 A roundup of dance events in London this month.

Sidi Larbi Cherkaoui collaborated with 17 Buddhist monks from the Shaolin Temple in China and sculptor Antony Gormley to create his world famous Sutra. A feast of form for the eyes, the monks, nimble and strong to the extreme, negotiate the multi-boxed sculptural scene with the same precision they use in their Kung Fu training, to explore the philosophy of their Shaolin tradition. Sadler's Wells, 3-6 April, 7.30pm, tickets £12- £38.

Satyricon, a collaboration between choreographer Jennifer Essex and composer Charlie Usher is based on the fantasy film of the same name. Touching on politics, class war and classical myth, it promises to draw the audience into a new, unexpected world. The Last Refuge Theatre, 7 April, 8pm, tickets £8.

What now 2013 is a multifacted three-day festival curated by Frank Bock which questions, deconstructs and surrenders to choreographic practice — showcasing the diversity of current making and thinking in contemporary dance. With performances, lectures, installations and screenings from artists all over Europe taking place throughout and around Siobhan Davies Studios, it looks set to be a hive of activity, stimulating body and brain. Siobhan Davies Studios, 5-7April, tickets £5-£15.

Aerial work can be full of the shallowly spectacular, so the subtle gem which is Not Until We Are Lost by Ockham's Razor is a special work indeed. With a strikingly simple moving set, upon which the performers clamber and pass each, the audience move underneath and around, viewing the work from angles of their choice. There's a dangerous gentleness to the performed interactions which is deeply moving, quietly surprising and magical. Arts Depot, 19- 21 April, 7.30pm, tickets £16.

The eagerly anticipated biannual Place Prize Final is the culmination of a hotbed of competitive creativity. Having already seen off 15 other choreographers, Eva Recacha, h2dance, Riccardo Buscarini and Rick Nodine will compete to become the overall winner of the coveted £25,000 prize, which will be decided in the night. The Place, 17- 27 April, 8pm, tickets £17- £25.