The Winslow Boy @ The Old Vic 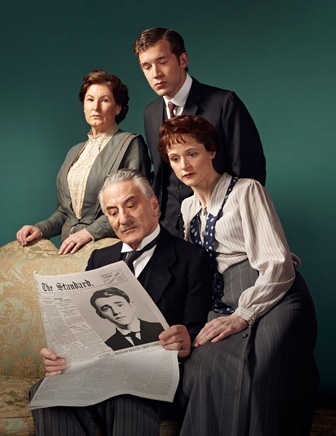 Lindsay Posner’s production of Terence Rattigan’s The Winslow Boy at the Old Vic isn’t going to win any awards for innovation. There’s nothing flashy about this supremely traditional piece of English drama. But, like a beautiful piece of Edwardian furniture, there’s lots to admire in the exquisite craftsmanship and poise of the production.

Arthur Winslow’s youngest son Ronnie has been expelled from naval college for stealing a five-shilling postal order, something he’s adamant he didn’t do. The true story of a father’s two-year battle to clear his son’s name here becomes a study in staunch, pre-war, stiff-upper-lippedness, set entirely in the Winslow family’s drawing room.

Just as in Eastenders someone will mutter “Why’re you doin’ this, pet?” about some seemingly inexplicable conflict, only to be greeted with the age-old refrain, “We’re faaam’ly!” so Rattigan’s piece shows the powerful bonds that hold a domestic unit together. As Arthur fights for justice for his son, the strain is felt across the family: the layabout older brother is forced to give up his place at uni; Ronnie’s suffragette sister is suddenly less attractive to her soldier fiance; and Arthur’s health deteriorates dangerously.

Despite the fact that most of the action (the expulsion, the House of Commons debates, the court-room drama) is merely reported within the staid drawing room, Rattigan’s writing combined with powerful performances mean the off-stage antics are vividly brought to life on stage. Crafting the play like this might’ve been the result of theatrical economics; but the effect is to emphasize that what happens in the world at large has deep consequences on the microcosm indoors.

That’s not to say there are no on-stage fireworks. The bullying lawyer, Sir Robert Mortimer’s attack on the young Ronnie before the interval is one of the most intense pieces of shouty theatre we’ve seen in some time.

Indeed, Posner’s production is packed with pitch-perfect performances: Henry Goodman’s Arthur combines authority with heart-melting humanity; his increasing physical frailty through the show is moving to watch. Naomi Frederick (Catherine) produces a powerful portrait of a intelligent young feminist; while Deborah Findlay and Nick Hendrix bring the right amount of comedy and pathos to the dippier members of the clan.

The Winslow Boy isn’t a perfect piece (it’s rather too long and slow at times), and certainly won’t win over any fans of experimental theatre. But for traditionalists looking for an exquisitely crafted play, beautifully produced and expertly acted, it should be a very pleasing choice.

The Winslow Boy runs until 25 May at The Old Vic, 103 The Cut, Waterloo, London, SE1 8NB. Tickets cost from £11 to £50. Visit oldvictheatre.com/the-winslow-boy to find out more. Londonist saw this show on a complimentary review ticket.