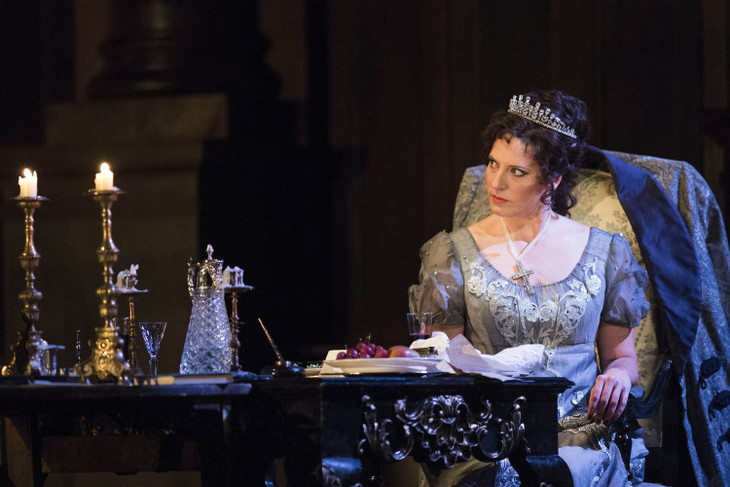 Set against the background of Napoleon's invasion of Rome in the summer of 1800, Puccini's Tosca is an opera that boasts sex, lies and violence in a brisk work with ravishing tunes. Criticised at the time for its souped-up, melodramatic narrative, Tosca nevertheless captured the hearts of opera-goers at its 1900 premiere, and is still an enduring reportory favourite.

The Royal Opera's current production is a revival of Jonathan Kent's 2006 staging, and potentially familiar to viewers from the cinema version filmed and released in 2011. The action unfolds in three relatively brief acts, opening in the candlelit church of Sant'Andrea della Valle  where we find Republican sympathiser Cesare Angelotti in hiding. He is aided by painter Mario Cavaradossi, a Republican who has vowed to stand against the tyrannical Chief of Police, Baron Scarpia. Cavaradossi is the lover of Floria Tosca, a celebrated singer who is desired by Scarpia; Tosca is beautiful and adored, but her passionately jealous nature makes her easy prey for Scarpia's machinations.

Italian tenor Massimo Giordano is no stranger to the character of Cavaradossi, having performed the role in Paris, Berlin, Munich and San Francisco. Giordano brings a light and supple tone to the painter's first aria, Recondita armonia ("hidden harmony"). His performance as a young bohemian lover, persuading Tosca of his fidelity, is charming without being cloying. Michael Volle makes a superbly villainous Scarpia: carnal, sadistic and deceptive.

The evening is Tosca's, however. Beginning the opera as a jealous coquette, clearly used to getting her own way, the character blossoms into a self-sufficient woman prepared to kill in order to defend herself and her lover. South African soprano Amanda Echalaz sings the role of Tosca with fiery intensity and a fantastic set of pipes. Tosca is a dramatic singer's role requiring expressive vocalisation as much as virtuoso technique. Echalaz, who stood in for Angela Gheorghiu at Covent Garden in 2009, is rapidly making the role her own. The centrepiece of Act 2 is Tosca's agonised plea for divine assistance Vissi d'arte ("I lived for love"); Echalaz makes this a poignant personal meditation that raises neck-hairs at the back of the ampitheatre.

What the opera lacks in the sensitive realism of La Boheme or Madama Butterfly it makes up for in visceral narrative punch. The brief, brutal final act is all double-crosses and violent endings. (Spoilers alert) Tosca is notable as perhaps the only opera that kills off all three of its major characters. Cavaradossi, knowing that one doesn't foment revolution without breaking a few eggs, seems romantically resigned to his fate while Tosca appears blithely unaware of it. Even a century on from its premiere, and for all that the story is known, Tosca's final act still has the power to shock and silence a modern audience.