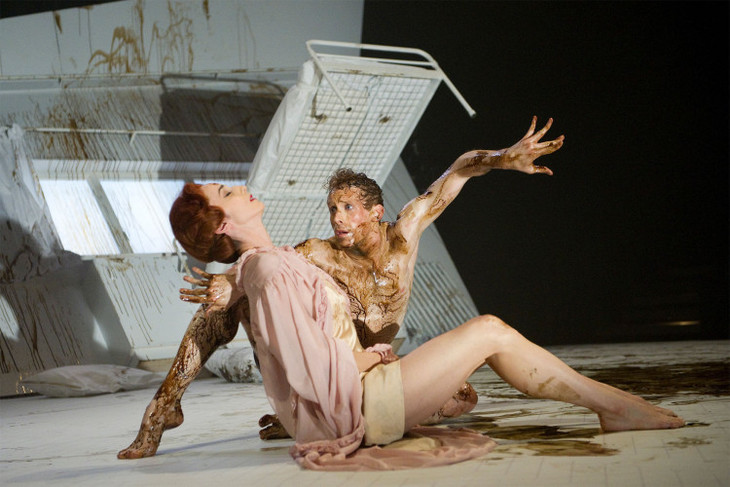 It's perhaps one of the most iconic opening lines in literature: "As Gregor Samsa woke up one morning from restless dreams, he found himself transformed in his bed into a monstrous vermin."  This very opening is the first challenge facing Arthur Pita in his dance version of Kafka's famous story; the combination of dramatic shock and matter-of-fact narration is difficult to match in any form other than text. Pita must find ways to represent Samsa's deteriorating state of mind and body other than words on the page; with this award-winning choreography, first presented in 2011, he is partially successful.

To establish Samsa's state of mind in the days leading up to his unexplained transformation, Pita ditches the opening in media res and shows us episodes from the lead character's oppressively hudrum daily life. Day after day, the alarm clock sounds in the dark, Samsa rises and catches the early train to a soul-destroying sales job. Royal Ballet dancer Edward Watson portrays the grinding tedium of Samsa's life with mechanical, restricted movements and an illegible mask of a face. He arrives home daily, greets his anxious mother and beloved younger sister, barely acknowledged by an unemployed grouse of a father.

Time passes and little changes, until one morning the alarm clock goes off unheeded and Samsa fails to rise. We find him lying on his back, twitching fingers and toes (Watson's toes really do twitch, and they are a remarkable sight), seemingly unable to get out of bed. The family are fretful, the boss comes knocking on the door to find out what has become of his salesman, and still Samsa is trapped in his new state, scuttling on the floor. Kafka's story never makes explicit whether Samsa has truly, physically transformed into an insect or whether the early mornings and financial anxiety have simply caused his mind to flip; Pita's production does a fairly good job of preserving that ambiguity. When the family finally burst through Samsa's bedroom door, their horrified reaction could equally be to a giant insect or a man crawling bestially on the floor.

Much praise has been given to Watson's performance in the transformation scene, and rightly so - his hyperflexible arms and legs become winding, insectoid appendages and he contorts with a fascinating physicality. The problem for Watson, and for Pita, is that after the primary transformation (extended by a dream sequence in which Samsa becomes even more verminous), there's not a lot for the character to do. Family life continues in the room next door; the sister practices her ballet, the father finally gets a job and three lodgers arrive. Meanwhile, Samsa continues writhing in an ever-growing pool of sticky dark goo in his own bedroom, occasionally crawling up a wall or hiding under the bed. Although it looks amazing, there's nowhere for the character to develop physically and no way for Pita's choreography to explore the inner state of his protagonist.

There are narrative changes, too; rather than simply growing bored with their deadweight relative, as in Kafka's text, Pita has his family become enraged by a series of horrifying confrontations, the last in the presence of the lodgers. It's easy to see why the latter works better on stage - we see a clearer motivation for the family wanting Samsa gone than simple ennui, but this increased drama comes at the expense of some of the poignancy of the text.

There's much to admire about Pita's presentation, including excellent performances from the whole cast (particularly Bettina Carpi as the non-nonsense cleaning lady, and Laura Day as the adorable younger sister) and a superbly claustrophobic atmosphere. The Metamorphosis is a challenge for a translator in any language; for Pita, translating a work of psychological absurdism into physical language is an even more ambitious task. It's almost inevitable that some of the narrative's disturbing emotional impact goes missing, but this is still an evening of great physical entertainment.

The Metamorphosis is at Linbury Studio Theatre, Covent Garden WC2E 9DD until 23 March at 7.45pm and 23 March at 2pm. Returns only .