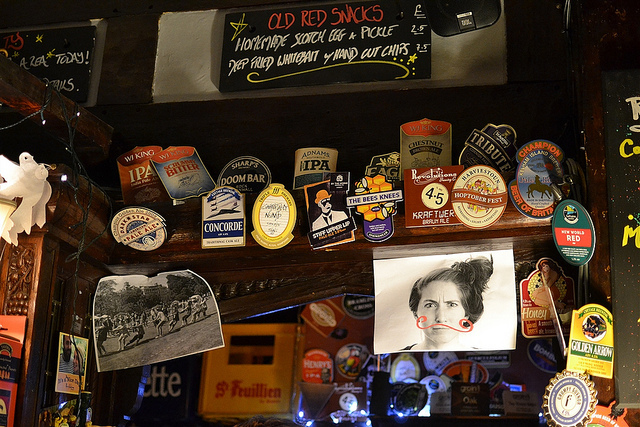 Largely as a result of the Easter bank holiday, there is a pleasingly large range of beer festivals to choose from this month. Hop to it!

The Camden Centre, Camden. The London Drinker Beer and Cider Festival returns for its 29th year. Not only will it feature more than 100 real ales, including 40 beers from 15 London breweries, but for the first time a London-made cider has made it into their extensive range of ciders and perries. Entry to the lunchtime sessions (12pm-3pm) on Wednesday and Thursday is free, otherwise admission from 5pm on Wednesday and Thursday or 12pm on Friday is is £3.50.

The HG Wells Centre, Bromley. Bromley CAMRA are staging a Mad March Cider Festival to promote the year-round pleasures of drinking cider and perry. 30 ciders and perries will be on offer, alongside food, entertainment and even a splash of real ale. The festival will be open from 12pm-11pm and entry is £1 or free for CAMRA members.

The White Horse, Parson's Green. As hoppy as a mad March hare, this festival promises a wide selection of ales as golden as our esteemed Mayor's hair. Beers are all made in Britain and highlight the myriad styles and flavours on offer throughout the UK. If weather permits, the pub's famous BBQ will be blazing, and on Saturday you can listen to live music and meet many of the brewers.

Walthamstow Cricket Club, Walthamstow. The cricket club will be hosting its second-ever beer festival this weekend, featuring a wide variety of real ales from breweries that include the East London Brewing Co and Fullers. Live bands will play on Friday and Saturday nights, or head down on Sunday to exercise your grey matter in their pub quiz. Drinks are at a reduced price and entry is £5 (£4 for CAMRA members), which includes a glass.

Le Gothique, Wandsworth Common. The popular Wandsworth Common Beer Festival returns to serve a selection of ales in the shadow of the impressive Royal Victoria Patriotic Building. More than 120 new and hard-to-find beers will be on offer, alongside 30 ciders, 20 wines and a variety of food. The special preview night on Thursday evening allows you to sample an unlimited amount of beer betweeen 6pm and 11pm for £25, otherwise the festival runs from 1pm Friday-Sunday and entry is £4, or £3 for CAMRA members.

The Hope, Carshalton. The newly expanded pub is hosting a 'White Rabbit' beer festival in celebration of Easter.

The Fox, Hanwell. Keep an eye on the website for forthcoming details of this West London pub's Easter beer festival.

The Old Fountain, Old Street. 18 real ales will be on offer at the pub's Easter beer and music festival, alongside a large selection of bottled beers.

Westow House, Crystal Palace. More than 40 London brewed ales will be available at this festival, alongside live music and DJs. Entry is free.

Brodies, Leyton. The brewery's popular Bunny Basher Festival returns with over 50 beers on offer during the 4 days. One highlight will be their 24% Elizabethan ale, which is aged in port barrels and available for the first time in bottles and kegs. Tread carefully!

The Victory Club, South Norwood. Real ale, cider and live music will be on offer at this festival, and entry is free.

Extra beer goodness: if you can bear to venure just outside the M25, the Egham beer festival is also taking place on 28-31 March.