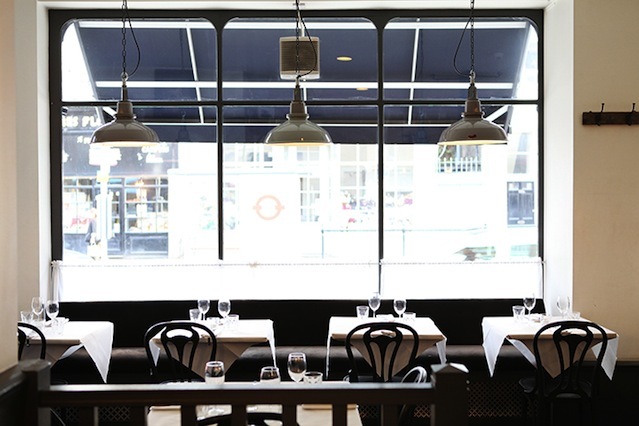 It may not be particularly far outside of Zone 1, but once you’ve veered off Upper Street and away from Highbury & Islington station, it gets very residential very quickly. This would usually mean that restaurants have to fight a bit harder to pull in the punters; in the case of Trullo, it clearly has no problem doing so. Perhaps in part due to an out-of-the-blue rave review from Jay Rayner almost three years ago — not to mention the well-heeled nature of the locals —  it’s almost at capacity on our weekday night visit.

The room is low-lit, the tables close (but not uncomfortably so) and the open kitchen boisterous in a playful Italian way. The smell of chargrilling meat radiates provocatively around the room and we’re brought a selection of freshly baked bread and what are among the plumpest, greenest, juiciest olives we’ve encountered. They’re from Sicily, we’re told.

The menu is short but changes daily, offering a varying selection of antipasti, primi, secondi, oven and charcoal grill dishes as the chef sees fit. Incidentally, said chef is Tim Siadatan, one of the original graduates of Jamie Oliver’s Fifteen project and arguably one of the scheme’s biggest success stories.

For starters we dig into a grilled ox heart, which is lusciously tender and deeply beefy but surprisingly mild in terms of offal flavour, being ruled instead by wafts of sexy, oakey charcoal; it is certainly nowhere near as challenging as the name suggests. A tagliatelle made with smoked eel and amalfi lemon is the polar opposite of this earthy, hearty dish. Light and sprightly with al dente texture and a zesty edge, it’s a dish which has a real spring in its step.

A slow-roast lamb shoulder served with silky, oozy, meltingly soft roast aubergine and braised chickpeas is at once rustic and regal, boasting a distinctive smoky char (OK, so they clearly like the smokey flavour here) and unctuously moist flesh, which falls from the bone. It puts a still very good veal shin to shame. The latter is full-flavoured but a tad dry, triumphing mainly due to a splashing of gloriously garlicky melted butter and a particularly tangy salsa verde.

Throw in a rhubarb and almond tart that’s at once sweet and spiky, a comprehensive and considered all-Italian wine list with prices that start at just over £20 a bottle, and — on a second visit within two weeks — a bloody good Martini made with one of those Sicilian olives and we’re head over heels innamorati.

Trullo is at 300 St Paul’s Road, N1 2LH (view map). Our slap-up three course meal for two with wine came to about £75. Visit their website here.