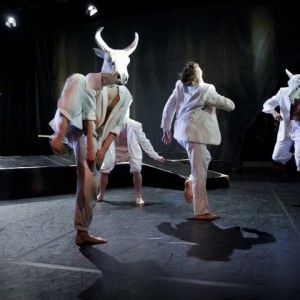 Much as the changing of the seasons puts the weather in flux, this years' March dance offering is emotional, man. It's all pretty intense but riveting to boot, so get stuck in.

In-Finite by Ijad Dance Company is based on 100 anonymously donated secrets, and looks set to be a heady concoction of dance, digital and (audience-driven) social media by Lebanese-Argentinian choreographer Joumana Mourad. Using contemporary movement with roots in Raqs Sharqui — Egyptian belly dancing — the dancers will interpret these secrets, while the audience is encouraged to interact via their smartphones and tablets; who knows, this could be chaotically brilliant. Richmix, 7.30pm, 8 March, tickets £12.

Lately it seems that a good animal head atop a dancer is the sign of a promising dance work, and this will no doubt ring true for Rosie Kay Dance Company's There is Hope, a piece based on the seven deadly sins. Highly athletic, ritualistic and emotive movement portrays a transcendence of the real world into hell and eventually out again to redemption. Using black comedy to explore faith, religion and other huge themes such as death and sacrifice, this piece, with its cacophony of sounds and images, will be a highly evocative evening. Laban Theatre, 7.30pm, 14 March, tickets £15

Willing to work hard and reap the rewards? If you missed it in 2011, Arthur Pita's award-winning work The Metamorphosis, an adaption of Kafka's novella of the same name, will drag you to psychologically nightmarish depths with its darkly surreal depiction of man-becoming-insect. Royal Opera House, 7.45, 16-23 March, tickets £11-£32.