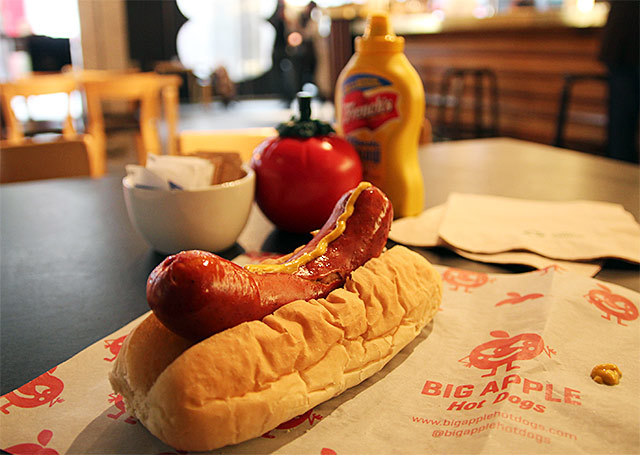 The unit at the foot of Centre Point, for many years a nightclub, re-opened recently as Apartment 58, a members' bar (or, as their website has it, "a global space, supporting and connecting the creative industries, hosting ideas and people.") In the hope of getting people through the door during the lunch hours — and perhaps convincing them to fork out for a membership — the proprietors have invited street food vendors to take up short, six-week residencies inside.

First up is Big Apple Hot Dogs. Arguably the catalyst for London's gourmet dog revolution, Big Apple began slinging  immensely satisfying New York-style weiners from a cart in Old Street a couple of years ago, and has established a reputation for quality, craft and simplicity. On this visit we tried the Big Frank (pictured), a hefty all-pork frankfurter liberally seasoned with paprika and pepper, served in a soft bun. A thin line of mustard on top made it into a perfect quick lunch.

Good as the food was, the venue left much to be desired. Apartment 58 is new to the area, and teething troubles are to be expected, but the staff seemed confused about what exactly was going on — we were first directed to order from the cart directly, before being re-routed to the bar, whilst later on we saw waiters taking orders from tables. We also had to ask on more than one occasion for our change, before finally going to the bar to get it (and then waiting five minutes while the chap dealt with another customer's complaints). The experience left a bad taste in the mouth, a contrast to the quality of the meal itself.