Tourists’ Thoughts Of London After The Great Fire 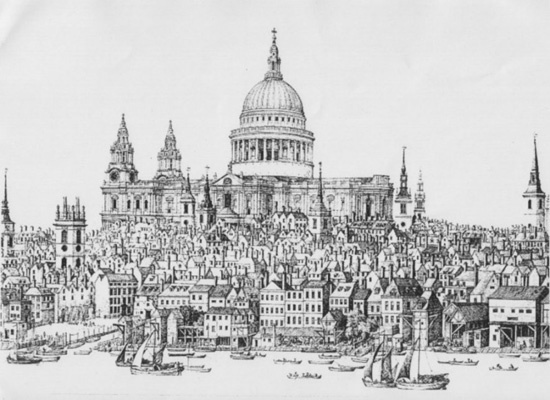 Earlier this week we brought you the experiences of a couple of travellers to London around the turn of the 17th century. We've also dug out the writings of a few others from the late 17th and 18th centuries.

Guy Miege was born in Lausanne and taught French in London from 1668. His account hints at how badly the city must have smelled:
"The Dampness of the Air, the perpetual Hurry of Carts and Coaches, with the Want of a common Sewer in many places, and the Difficulty of removing that Inconveniency by making Sewers through other Mens Ground (to pass by the Neglect of Scavengers) are a great Obstruction to the Cleanness of this Place."

Francis Maximilian Misson, a Frenchman who fled to England after the 1685 Edict of Nantes, looked at the bits of London that didn't burn in the 1666 fire and called the houses:
"The scurvyest Things in the World, as appears very plainly from the whole Streets still remaining, nothing but Wood and Plaister and nasty little Windows, with but one little Casement to open. The Stories were low and widen'd one over another, all awry and in Appearance ready to fall."

Neither was he impressed by showboating going on in Hyde Park:
"Here the People of Fashion take the Diversion of the Ring: In a pretty high Place, which lies very open, they have surrounded a Circumference of two or three hundred Paces Diameter with a sorry Kind of Ballustrade, or rather with Poles plac'd upon Stakes but three Foot from the Ground, and the Coaches drive round and round this. When they have turn'd for some Time round one Way, they face about and turn t'other."

Georg Christoph Lichtenberg, a German scientist, visited England in 1770 and 1774-75. He's left with us with a vivid description of Cheapside and Fleet Street, packed with porters, coaches, chaises and carts:
"Through all this din and clamour, and the noise of thousands of tongues and feet, you hear the bells from the church-steeples, postmen's bells, the street-organs, fiddles and tambourines of itinerant musicians, and the cries of the vendors of hot and cold food at the street corners. A rocket blazes up stories high amidst a yelling crowd of beggars, sailors and urchins. Someone shouts 'stop thief!', his handkerchief is gone. Everyone runs and presses forward, some less concerned to catch the thief than to steal a watch or purse for themselves. Before you are aware of it a young well-dressed girl has seized your hand. 'Come, my lord, come along, let us drink a glass together,' or 'I'll go with you if you please.'"

Zacharias Conrad von Uffenbach was a scholar and consul from Frankfurt and visited England for five months in 1710. His observation of the dinner table at Middle Temple Hall has passed into infamy:
"There were no napkins and the tablecloth looked as if a sow had just had a litter on it. We had no desire to dine there and hastened to look at the Library."

He also wrote this fantastic account of medieval London Bridge, which used to be lined on either side with houses:
"We had gone 20 yards over it without being aware that we were on the bridge, when I asked our interpreter how soon we should reach it. He then told us that we really were almost over the centre of the Thames. One does not take it for a bridge because it has on both sides large and handsome houses, the lower storeys of which are all shops. Well over halfway across the bridge towards Southwark (or Soterick, as it is generally pronounced) is a single place about eight feet long where there is not a house and the Thames can be seen through the iron palings."

Interesting to note that St Paul's was turning black almost as soon as it was built:
"We climbed up the tower in order that we might have a prospect of the town from above before the air was full of coal smoke. I would indeed maintain of this church that it is one of the finest buildings in the world for its size, elegance and strength. Even if one does weep over it, one must yet lament that it stands here, for it is already so black with coal smoke that it has lost half its elegance."

Hampstead clearly had pretensions to gentility, but wasn't quite there yet:
"The nearest medicinal spring to London. The spring is some way out of town and near it are a coffee house and assembly room. Everything goes very pell-mell; and although vast quantities of harlots ply their trade there, the other females are not ashamed to dance in the same room as them."