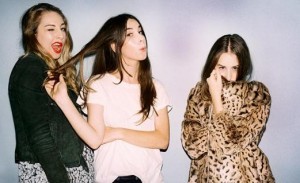 There's an eclectic mix of gigs on sale this week, from arena-filling R&B through to niche rock celebrating facial hair. Tickets to all these should be available from 9am Friday.

First off, catch BBC Sound Of 2013 winners Haim (pictured) at Heaven on 24 April. The band of three sisters from LA played a covers-heavy set at Dingwalls last year, but this gig will be a good opportunity to see if they're able to live up to the hype. Tickets £10 + bf.

Folktronic soloist James Yuill somehow manages to cram everything from quiet acoustic sounds to electro and disco into his records. Expect a varied performance at Corsica Studios on 16 May. Tickets £10 + bf.

R&B star Abel Tesfaye is better known as The Weeknd, and he'll bring his solitary-sounding songs to a bigger stage than ever when he visits The O2 on 26 November. Tickets from £28.50 + bf.

Also at The O2, but on 8 October, is the massively-successful Bruno Mars. He'll deliver an evening of inoffensive, glossy tunes which cross the lines between pop, R&B and hip-hop. It'll sell out, of course – tickets £39.50 + bf.

The Beards are an Australian comedy-folk-rock band who sing songs about one subject: beards. Frankly, we've never heard them, but with song titles like No Beard, No Good, how can you possibly go wrong? See them at Hoxton Square Bar & Kitchen on 20 May. Tickets £8.50 + bf.

Also booking this week: A Day to Remember, Melvins and Tegan and Sarah.