London's Getting A Cat Cafe 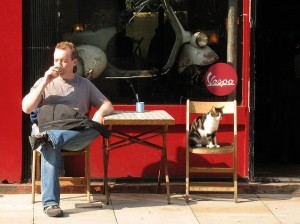 Beloved in the Far East, it looks like a cat cafe will be coming to East London after Lady Dinah's Cat Emporium reached its crowdfunding target.

The idea of a cat cafe, where people enjoy a drink and a cuddle with an obliging kitty, is big in cities where people work long hours, live in flats without much space and landlords who don't like the idea of pet fur and destroyed furniture. A 15 minute scritching session can help reduce stress levels and just generally be quite brilliant.

The people who wanted to open London's first cat cafe set a target of £108k to be met by 15 February; the total stood at over £109k last night. They're working with the Mayhew Animal Home in Kensal Green who will help find the right kind of chilled-out cats and advise how best to look after them, and the Food Standards Agency and animal welfare and licensing officers at several East London boroughs have given the all clear. This is srs bsns.

Photo of Scooterworks in Lower Marsh, with resident cat, by trailerfullofpix from the Londonist Flickr pool. Note: we don't know if this cat still lives there.