Boris Bike Scheme: Where Will It End?

By Jonn Last edited 120 months ago
Jonn Boris Bike Scheme: Where Will It End? 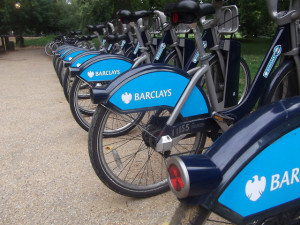 Once upon a time, the geographical limits of Transport for London's banker-backed cycle hire scheme made some kind of sense. If you were in or around Zone 1, you were able to borrow a bike. If you weren't, you couldn't. Easy.

Gradually, though, this internal coherence has begun to melt away. Extending the scheme eastwards before the Olympics had some sort of logic to it, until it transpired it would stop some way short of the actual Olympic Park. The new, south-western extension is even harder to make sense of. Once it's completed, the cycle zone will extend all the way from Old Ford Lock to Putney, on the fringes of Richmond Park and suburban Zone 3. If you're a cyclist living in more central areas such as Chalk Farm or Bermondsey Spa, though, you're out of luck. No blue bikes for you.

It is possible this rather lumpy expansion is based on some clever TfL masterplan: perhaps these are simply the areas where you're most likely to find cyclists. But there's a case that says it's those areas where people don't already cycle where the scheme would have the most benefits. And anyway, it's difficult to say for sure, because TfL has released no such research.

What seems more likely is that expansion is being driven at least partly by who’s willing to pay for it. Last year Mayorwatch revealed that councils had been told expansion into their boroughs was "conditional" upon their making a contribution to fund new infrastructure, and last Friday's Evening Standard rounded up exactly what those contributions were. The eastward expansion cost Tower Hamlets £1.9 million; the latest round will cost Lambeth £200k, and Kensington & Chelsea £400k. Wandsworth and Hammersmith, meanwhile, are paying up to £2 million apiece.

This pay-to-play approach to transport infrastructure is something we're seeing more and more of (the Northern Line extension to Battersea being another example). In some ways it makes sense: times are tight, and TfL has to think of its costs. If co-funding schemes like this is the only way of getting them built at all, then it surely beats the alternative.

But it raises some awkward questions, nonetheless. What if an inner borough, with a Labour council and no spare cash, were to reject the idea of co-funding one of Boris's pet projects (particularly since, as Mayorwatch has noted, he tends not to thank councils for their contribution)? Would we end up with a hole in the scheme forever more?

Several miles to the west, Wandsworth's travel spokesman Russell King has said he wants "borough-wide coverage". If he puts the council’s money where his mouth is, will Roehampton see coverage before Rotherhithe? Could Richmond? Kingston? Sure, they're a long way out, but if they're willing to pay, why not?

This, we'd suggest, would be silly. The reason we have public authorities like TfL is so they can plan infrastructure that benefits the whole city, rather than just the bits where rich people live. The cycle hire scheme makes most sense if it offers intensive coverage throughout a single, relatively small area. That, logic suggests, means the centre of town. Before it begins looking to suburbia, TfL should finish what it's started.