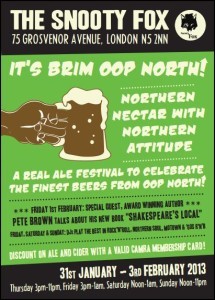 Happy New Year, beer drinkers! We've got 12 months of cracking beer festivals to look forward to, and anyone feeling guilty about drinking while their friends detox will be pleased to know that the British Liver Trust claims two alcohol-free days a week is actually much better for you than a "Dryathlon". Which leaves plenty of time for beer festivals! (In moderation, of course.)

14-18 January
Wetherspoons Pubs, South London. Whither should you wander? Why, to Wetherspoons, which is staging five mini London Beer festivals between now and April. Ten London breweries and 20 ales are on offer during the festival, with each pub offering a different combination. Pop down to your local 'spoons for an informative booklet, or check out makemineabeer.com for an online version and an explanation of the festival's complex beer allocation system.

15-31January
The Duchess of Cambridge, Stamford Brook. This popular pub hosts 10 beer festivals a year and kicks off 2013 with one entitled 'North vs South'. At least 7 ales are on tap at a time, accompanied by as many ciders.

23 January
The Royal Standard, Blackheath. It's not strictly a festival, but the pub's 'meet the brewer evening' with Pete from the Hackney Brewery seemed well worth a mention. The event starts at 7.30pm and CAMRA members can get 20p off every pint while they're there.

28 January-1 February
It's the turn of North London Wetherspoons pubs to serve up some London ale goodness (see above). The Devonshire House lists the beers it will be offering, otherwise pop into your local 'spoons for a booklet or to interrogate the bar staff.

31 January-2 February
The Snooty Fox, Canonbury. Always on form with their festival puns, the Fox's latest offering is the 'It's Brim Oop North!' festival, which celebrates the finest ales from places where 'dinner' actually means 'lunch'. Not only can CAMRA members sample beers and ciders at a discount, but there's also a variety of live music during the weekend and a talk from acclaimed beer writer Pete Brown on Friday. See the website for opening times and further details.