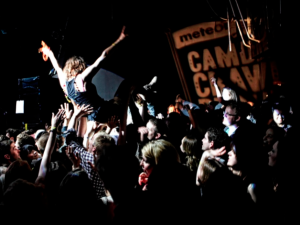 Organisers of the Camden Crawl have decided to end seven years of opening the festival circuit by moving the award winning three-day event to October in 2013.

Despite being the originator of the multi-venue urban festival, the May festival circuit is too congested and Brighton’s Great Escape has established itself as the main industry showcase.

The Camden Crawl originally took place in autumn, so the move allows it to return to its original home while recreating a new identity for the festival as the season closer.

Since its inception in 1995 it's morphed from a one-day showcase of Scarfo and Kenickie in the Camden Palace and Dublin Castle (OK, maybe not be the exact venues, but you get the idea) to a three-day industry hootenanny with international mega-stars dropping in for secret gigs.

The annual ear-blistering stagger through the tourists to stand in a cramped venue is a mainstay of London’s festival circuit, and the new date allows it to cap off a year which already looks to be a fantastic one for London festivals.

If your diary already has it pencilled in, then there is a sister event happening in Dublin, between 3-5 May, but that involves leaving London and that, as we all know, is dangerous.

There are no confirmed dates, nor acts, but it is guaranteed to brighten up the post-summer blues.