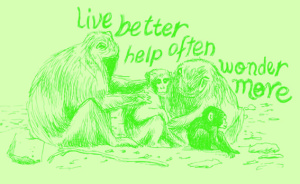 The Sunday Assembly is a new way to spend Sunday mornings. Held in a former church in Islington, it's a godless gathering for people who want to hear funny and interesting people talk, sing songs and celebrate life. The first one is 6 January and your main guest will be the superlative Andy Stanton, creator of the Mr Gum books, and the theme will be 'beginnings' – appropriately enough. Future speakers include Arthur Smith, Lucy Porter, Josie Long, Susan Calman, Imran Yusuf and Nick Revell.

The idea initially feels similar to The School of Life's Sunday Sermons, with one very stark difference: The Sunday Assembly is free, as opposed to £15 for the sermons. Both places want to encourage better and wiser living, and comedians Sanderson Jones and Pippa Evans, the people behind the Sunday Assembly, hope to build a community that will go out and volunteer in the local area and generally turn good ideas into good actions. Plus the Sunday Assembly seems a bit looser and, dare we say it, more fun.

Events start late enough to shake off a hangover so stick the dates in your diary and start 2013 with good intentions.