Review: The Architects @ The Biscuit Factory

By Ruth Last edited 116 months ago
Ruth Review: The Architects @ The Biscuit Factory 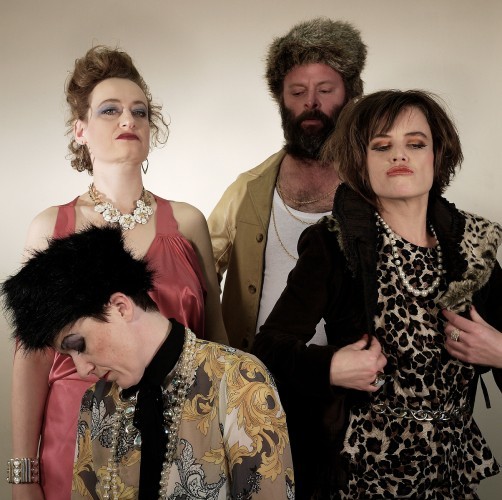 Nestled in the romantically titled but physically imposing custard halls of Bermondsey's Biscuit Factory, Shunt's latest incarnation invites you to step into the labyrinth, out onto a floating dance floor, and on into the void beyond.

As you'd expect from Shunt, this production is far from conventional - at first, you're left to explore the maze which conceals surprises and moments of interaction (as well as the toilets) of your own accord. The bulk of the action, however, takes place whilst you prop up the bar of an elaborately constructed cruise liner, where a Daedaluseque character - reimagined as a bearded Dane - builds a mechanical cow, whilst Ariadne retrieves her stilettos from somewhere unmentionable (for want of spoiling the surprise). The Architects will give you a crash course in your glamorous new life at sea, whilst exposing the thin veneer of civilisation hiding our most animal behaviour, with a short lecture from Daniel Libeskind thrown in to appease those drawn in by the title alone.

This production has got many aspects that previous Shunt devotees will recognise - delightfully filthy booze, a fantastic band, and dancing long into the night. There's a sense of disorientation and weirdness that's seductive to let yourself be swept away in, and just as for life in the vaults it's partly this weirdness that makes it so fantastic. But in many ways this can be a little overwhelming, especially as the show seems to assume a certain amount of prior knowledge of Greek mythology and labyrinths to interpret some of the more subtle references.

Just as it takes a coherent arrangement of individually delightful components to create great architecture, it takes a coherent arrangement of delightful moments to create great theatre. In which case, this show is pure PoMo, with each of three distinct experiences grafted onto each other, with little regard for the frisson this creates. The result - whilst discordant - is not altogether displeasing, but it's not going to be to everyone's tastes. Unfortunately, comments from our fellow passengers about "not getting it" weren't uncommon. But whilst this ship may be adrift, with a crew uncertain as to the direction it is going, it's still fun to be along for the ride.

Be sure to wear sensible shoes and something warm. Performances run until 2nd February. Tickets £20/25 via the National Theatre website