Man Who Damaged Rothko Painting Gets Two Years In Jail 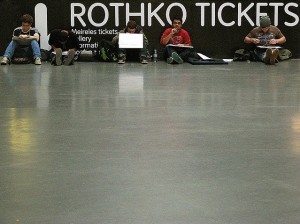 A man who damaged a Mark Rothko painting in Tate Modern has been sentenced to two years in jail. That's right, TWO years.

Back in October, Wlodzimierz Umaniec, described as the co-founder of an artistic movement called "yellowism", daubed his name and the words "12, a potential piece of yellowism" on the painting, called Black on Maroon. As an exercise in art criticism it's certainly pushing the boundaries, and Umaniec was subsequently arrested and charged.

While he said his defacement of the painting wasn't vandalism, others disagreed, notably Judge Roger Chapple, who described Umaniec's unusual method of promoting yellowism "wholly and utterly unacceptable". Whatever your opinion of Rothko or the contents of the Tate Modern in general, we think two years seems a tad excessive. But in this new and crazy age of jailing people for being idiots on Twitter or naked on top of Prince George, it would appear to be the next logical step.

Art fans can rest assured though, the painting can be restored at a cost of about £200,000. The restoration is likely to take 18 months, by which time Wlodzimierz Umaniec may even be out of prison.

Photo by Ova Hamer in the Londonist Flickr pool.