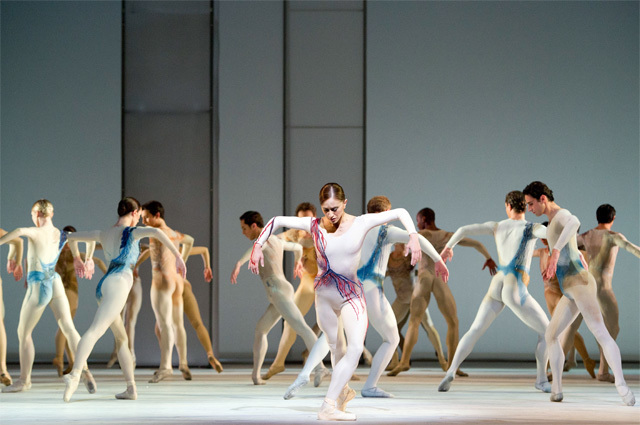 The world of classical ballet has always indulged in tragedy — cursed enchantments, jealous rivals and doomed romance are bread and butter for repertory companies the world over. But it was choreographer Kenneth MacMillan who brought to the postwar ballet stage themes of repression, rape and madness, themes that could also be seen emerging in dramatic theatre at the time. Determined to speak for his generation through ballet in the way that playwrights such as Joe Orton were doing in the theatre, MacMillan charged ballet's virtuoso techniques with contemporary concerns, and forged a revered body of work between 1953 and 1992 that removed ballet from its former context of  aristocratic folk-tales and brought it into the modern world. This mixed bill of short works, offered on the 20th anniversary of the choreographer's death, honours that legacy.

Concerto, created in 1966 on the dancers of the Deutsche Oper Ballet in Berlin to mark MacMillan's arrival as director of the company, is a witty abstract ensemble set to Shostakovich's Piano Concerto no.2 in F. Fast paced and defiantly modern — the dancers wear a very on-trend pallette of acid brights, with not a tutu in sight — the first movement puts the corps through its paces with choppy footwork and rapid arm placements set tightly to the music. Yuhui Choe is light as a whisked meringue in this section, tripping through the rapid combinations with delicate ease. In the second, andante movement Sarah Lamb melts her way through a beautiful curving pas de deux with Ryoichi Hirano, all soft dropping arms and arching torso and danced with a lovely effortless quality. There are playful touches to the choreography — Choe does the twist and the whole cast breaks out into the funky bump halfway through the third movement; but Concerto is chiefly designed to show off the skills of a tight ensemble, and the Royal rises to that challenge admirably.

MacMillan is perhaps best remembered for his story ballets, and Las Hermanas, inspired by Lorca’s play La Casa de Bernarda Alba, finds the choreographer in narrative mode. Five sisters live with their overbearing mother in rural Spain; their lives are upended by the handsome but brutish young man who is to be married to the eldest sister. Zenaida Yanowsky portrays the eldest sister as tightly-wound and shrewish, her hands balled into fists and her movements stiff and joyless. The youngest sister, secretly having an affair with the fiancé, is danced by contrast with wild and sensuous abandon by Melissa Hamilton. Returning to Covent Garden after a long hiatus, Las Hermanas is set to a curiously melodramatic score by neglected composer Frank Martin; the trembling harpsichord refrains have the air of a silent movie score, which is perhaps fitting for this dark, dramatic vignette.

The programme closes with Requiem, created in 1976 in memory of choreographer John Cranko. Danced to Fauré's beautiful Requiem mass, the work is as choral as the music that accompanies it. Groups of bodies create living, breathing tableaux in the space, forming and reforming into packs and clusters and lifting one another high towards the heavens. Despite the elegiac quality of both the dance and music, there is something very uplifting about this requiem — a sense that although life has ended in one place, it will certainly continue in another. Considering the life that MacMillan's works have had since the choreographer's own death, it's hard to think of a more fitting ending to this tribute programme.