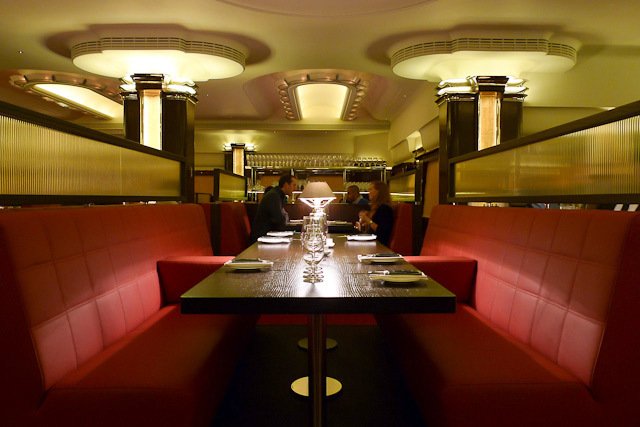 Suspend all sense of expectation: if you're confused by the lack of potatoes on the menu at a restaurant named MASH, then finding out that the Modern American Steak House chain is actually Danish might blow your mind.

The premise on Brewer Street was previously the site of Titanic — an appropriate name for a club which instantly slips two floors down below the surface. There's a merry pre-prandial dance of coat taking and reservation checks on the way down, before the frankly Holiday Inn-esque interior opens out into a spectacularly cavernous Art Deco dining hall. With a nod to their rivals Hawksmoor — whose new restaurant opened up the road on Air Street last week — an entrance bar surrounded with the kind of horseshoe-shaped leather booths you'd expect Joan Harris to sidle into leads eventually to a series of generously comfortable diner-style banquettes.

With all this opulence, the single sheet cardboard menu listing the Australian, American, Danish and Uruguayan steaks seems a little incongruous. There's a couple of simple fish dishes on there too, and "unlimited sauces" as our waiter over-enthusiastically points out, but we forwent the perversely French starters in favor of smoked salt provided to sprinkle over buttered bread, which was phenomenal.

Onto the steak. The Australian Wagyu was a beautifully tender strip of meaty butteryness — if a little more cooked than the 'very rare' we'd requested — but the aged Danish longhorn provided more of a distinctly carnivorous experience. The steaks aren't the only meaty thing to hit the table either — a bamboozling international selection of wine running well into three-figure price tags is weightier than Geoff Cape's fist. Thankfully, a bottle of faithful (if not particularly adventurous) Argentine Malbec can be unearthed for £23 among its many pages.

Sides of fried jalapenos, a Caesar salad, and unctuously slippery onion rings swathed in a pillow of crispy batter — each at £4.50 — provided more of the authentic Steak House experience that we'd been led to expect. But don't expect to be able to fit a dessert in after all that.

Dinner for two with sides, service and a bottle of wine came to £96.31, although The Damage, as they wittily titled the bill, included a 50% reduction on the food for the soft launch. Full price was £149.06. The 50% discount is available until 12 November.