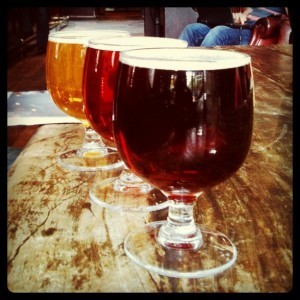 November sees the return of many popular seasonal beer festivals, including the acclaimed old ale festival at the White Horse. Put aside thoughts of Christmas shopping and enjoy a good beer!

The Talbot, Lewisham. Real ales, ciders and perries are available at this pub's festival, which will be replicated at the Prince Regent later on this month.

Leyton Orient Supporters Club, Leyton. The 15th incarnation of the club's Piglet Beer Festival will offer around 30 beers. This event is usually in the evening, but check the website nearer the time for full details.

The Peasant, Clerkenwell. This newly refurbished pub commemorates London's momentous year with their Make Love Not War beer festival. It features ales from some of the best London brewers, alongside proper festival food in the shape of pork and crackling baps.

The Prince Regent, Herne Hill. The beer festival moves from the Talbot (above) to this popular gastropub.

The Pembury Tavern, Hackney. This festival will feature around 45 ales, with 25 on offer at any one time. The pub is open between 12-11pm every day and there is  no charge for admission.

Waltham Forest Sports and Social Club, Waltham Forest. If you go down to the woods today you're in for a tasty surprise – 25 ales that celebrate the best of East London brewing. Live music will be played on Friday and Saturday evening, when the festival is open until 12am, otherwise closing times are 11pm on Friday and 5pm on Sunday. Entry is £1, or free for CAMRA members, except after 8pm on Saturday when admission costs £3.

Heathrow Beer Festival at the Concorde Club, Cranford. There's no liquid limit here, as 35 seasonal real ales and ciders will be available at this BA staff hangout. As well as a varied programme of entertainment, the festival also offers a chance to win BA flight tickets by competing in beer-related challenges. Entry is £3 for the public and you can even get a free shuttle bus to the venue from Hatton Cross station.

White Horse, Parson's Green. Their 30th Old Ale Festival will offer more than 60 beers, ranging from milds to barley wines. As usual, the festival is accompanied by a diverse programme of entertainment, including the chance to learn more about traditional brewing styles. The event commences in the newly refurbished pub at 12pm on Friday.

The Duchess of Cambridge, Stamford Brook. The pub's second annual Scottish beer festival offers 50 beers from north of the border, alongside a full Scottish food menu and 'more haggis than you can shake a bagpipe at'.