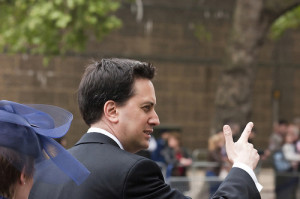 A demonstration against government cuts will take place in central London on 20 October — with Labour leader Ed Miliband attending in support of the trade unions.

The demonstration will be the latest in a series of protests against government austerity measures, though Unite's Len McCluskey has criticised Labour for their support of a public sector pay freeze.

According to the BBC's report, Miliband was nabbed by union member Chris Gilmour at this week's Labour Party Conference in Manchester who asked if he would be attending the demonstration.

Last March's anti-cuts protest attracted around 250,000 people, apparently making it one of the top five best-attended. Miliband's speech at Hyde Park attracted criticism after some sections of the protest turned violent, with deputy prime minister Nick Clegg accusing the Labour leader of 'dishonestly stoking the protest'.