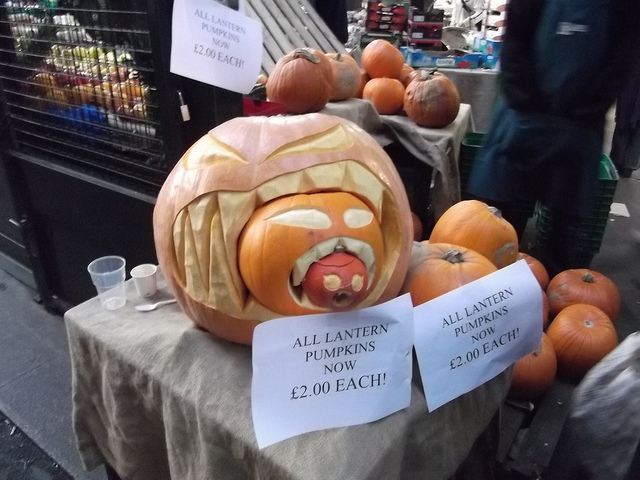 HALLOWEEN: If spooks ye seek, so to speak, then take a peek, at our Halloween listings, published last week (but not for the meek).

GIVE BLOOD: If you've never donated blood, what better day to do it than Halloween? Today's clinic is at St Mary Abbotts Centre in Kensington. Just turn up, 1-3pm and 4.30-7.30pm

PHOTOGRAPHY: The National Gallery's first major exhibition of photography opens today. Seduced By Art: Photography Past And Present looks at how photographers use fine art traditions in their work. Continues until 20 January 2013. £13.20, 10am-6pm

CHEAP FOOD: Chipotle have a special offer today, where anyone dressed in spooky attire can claim a burrito for just £2. Offer available at any of the five branches, with proceeds going to charity Foodcycle. £2, 4pm till closing

ALIENS: Tim O’Brien beams in to the Royal Institution to reveal the methods scientists are using to look for life on other planets and around other stars. £10, 6pm

LATE AT THE MUSEUM: The Museum of London has an adults-only late opening, with wax-moulded body parts, music and other diversion. Tickets for the Doctors and Dissection exhibition have sold out, but you can still see the regular galleries and enjoy the entertainment. £5, 7-9.45pm

Random London Ghost of the Day

Green Park has something of a reputation for haunted trees. One tale, apparently well known in the 1970s but since diminished, speaks of a Tree of Death. People and pets would shun it, birds would not land upon it, and sinister, vanishing forms would be seen around it. The exact location is no longer known. Notoriously unreliable ghost hunter Elliott O'Donnell related (or made up) the story of another tree in the park, haunted by a frustrated fiddler whose violin, and therefore livelihood, had been stolen, leading to his depression and ultimate suicide in the park. Finally, there's the Pig Tree, another long-lost supernatural plant famed for harbouring an apparition whose horrible face resembled a cross between a pig and a wolf. Again, it's location is unknown. Perhaps all three trees are one and the same, or perhaps it's all bullshit. In any case, the three tales are drawn from James Clark's underrated Haunted London.

Stronger winds, a dose of rain, but when you look at what's happening on the other side of the Atlantic, it doesn't seem to matter. BBC Weather.

Secret Hidden False Rumour Of The Day
While digging the tunnels for the Jubilee Line Extension, engineers dug too deep and disturbed a slumbering Balrog. Caging the beast added about £1 billion to the project's budget. It is now held in captivity beneath the O2 dome, biding its time, and planning its fiery escape.