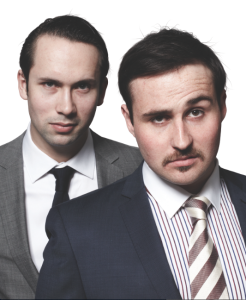 There was one point last night when Max Olesker (Max) and Ivan Gonzalez (& Ivan) were, between the two of them, doing a seven-way telephone conversation. Do the maths in your head, briefly. Seven voices. Two people. That is not even possible. It might have been eight, actually. "Oh, crap," we thought, with a goofy and bewildered grin. "Oh no, this is too good." It dawned on us that this show would be impossible to review as soon as they mimed rollerblading by wriggling across the floor. "Oh no, oh crap," we thought. "This is going to be impossible to review."

And it is, it is impossible to review. Max & Ivan: Are Con Artists is just impossible to review. It's like describing a unicorn, or the concept of jeopardy, or magnets. You can take vague stabs at the topic but you won't do it justice. A unicorn is just a beautiful horse with a horn. Jeopardy is, like, danger? Magnets are magic. And Max & Ivan are technically a couple of comedians who do highly-paced and sort of theatrical goofs while wearing jeans.

Those goofs centre around a caper-heavy plot that sees a gang of six ex-cons get back together for one final job, but it's much more than that. It's way, way more than that. The frankly astonishingly paced set-pieces are interspersed with flashbacks, lightning-quick scene switches and on-the-spot asides to the crowd. At one point they dragged an audience member on stage and ad-libbed a goof about turtles that ran so long the background music dwindled to silence. We were in tears.

Basically, this: fuck you, Max & Ivan. Can we say fuck you? Fuck you. Fuck you for making us review your show because it is too good for human words. Here are just a few that are only vaguely relevant: 'fast', 'relentless', 'lots of voices' and 'funny'. Also 'Max', 'Ivan'. Throw all those in a pile and dance on them, because they don't come anywhere close to describing the frenetic, fantastic and breathtaking show that Are Con Artists is. It is so funny that it has rendered the English language but a blunt tool.

Max & Ivan are just two magnificent unicorns of comedy. They are two big, scared magnets made of laughs. Go and see them. Go and see them with your eyes, and bring your chuckling boots.