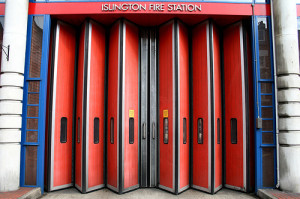 Up to 17 London fire stations face the threat of closure, in a move that would see over 600 jobs lost, it was revealed yesterday.

Over the next two years, the London Fire and Emergency Planning Authority (LFEPA) is looking to save over £65m in government-imposed cuts. It appears one way to meet this figure, is to close a number of fire stations across the capital.

A list of the stations under threat appears to have been leaked to the BBC. Paul Embery from the Fire Brigades Union called the proposal, “the biggest threat since the days of the Luftwaffe".  The stations at risk are said to be Acton, Bow, Belsize, Clapham, Clerkenwell, Downham, Islington, Kensington, Kingsland, Knightsbridge, New Cross, Peckham, Silvertown, Southwark, Westminster, Whitechapel and Woolwich.

At the London Assembly yesterday morning, LFEPA head James Cleverly insisted that there's not just one list in existence, but several which outline a number of possible future strategies. Cleverly’s statement was somewhat undermined when fellow LFEPA member Andrew Dismore pointed out that the plan to close 17 stations was marked as the preferred choice.

Speaking at yesterday's rather bad-tempered Mayor's Question Time, Boris Johnson denied anything official had been decided, but insisted closures would not be accompanied by a reduction in safety. Cleverly echoed this in stating that any cuts in the number of fire stations or fire engine vehicles would not slow current response times.

As it stands today, LFEPA has to maintain response times to within six minutes for the first appliance and eight minutes for the second.  Over the past decade, there has been a decrease of over 50% in the number of fires in London and a cut in fatality rates of 1/3.  Surely then, to maintain safety and potentially improve these fire related figures, the LFEPA needs to maintain, if not increase, the number of fire stations and fire engines in operation?

The proposal is expected to be discussed by LFEPA in November later this year.

Photo by hey mr glen in the Londonist Flickr pool.