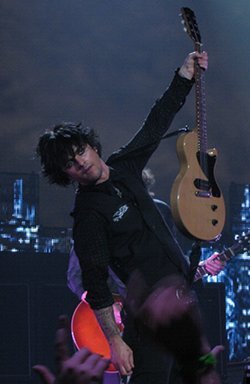 Gigs on sale this week include several big shows, plus a little one from a Fun Lovin' Criminal. Tickets to all these should be available from 9am Friday.

Are Green Day secret Gooners? That might explain why they've chosen to play Emirates Stadium on 1 June next year. If you missed their diddly Shepherd's Bush show last month then this will probably be your next chance to see them in London. Assuming Billie Joe Armstrong is back on form by then, of course. Tickets £55 + bf.

Love 'em or hate 'em, it's hard to avoid Mumford & Sons, whose second album is well on its way to achieving banjo-fuelled ubiquity. A twangy, foot-stamping, bluegrassy evening therefore awaits at The O2 on 11 December. Tickets £32.50 + bf.

Folky Jake Bugg is a singer-songwriter who built a profile over the summer via festival appearances and regular airplay. A couple of instantly catchy tunes didn't hurt either. See him at O2 Shepherd's Bush Empire on 27 February. Tickets £14 + bf.

Huey and the New Yorkers play Bush Hall on 7 November. Yes, it's that Huey, the Fun Lovin' Criminal and 6 Music DJ, fronting a new band with a name that must've taken whole minutes to think up. Audio clips online suggest a sound that's unsurprisingly similar to later Fun Lovin' Criminals material. To find out for sure, grab tickets for £16.50 + bf.

Having just released a glossy album packed full of hooks and played The Roundhouse as part of the iTunes Festival, Pink (or is it P!nk?) has now decided to bring her slick pop act to The O2 on 24 and 25 April. Tickets from £42.50 + bf.