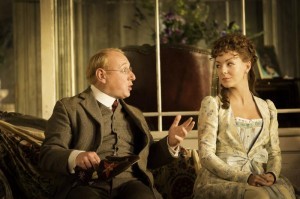 Don’t you just love Ibsen? Give us a middle-class household, a spoilt bitch balancing a shitload of frustration with a phobia of scandal and a fat helping of melodrama any day. Ooh, and a loaded pistol, don’t forget the loaded pistol. Else how will there be a violent, bloody suicide? Er… belated spoiler alert. Oh come on, it’s Ibsen, what did you expect?

In this new version of his 1890 play by Brian Friel, a dangerously bored Hedda Gabler and her adoring husband George return from their honeymoon to the opulent ‘dream home’ he bought on the expectation of an all-but-promised professorship. But when his academic rival and Hedda’s old flame, Eilert Loevborg, arrives back in town with an impressive new book – and a new squeeze, Thea Elvsted – things are shaken up.

Olivier Award-winning actress Sheridan Smith stars as the eponymous heroine – and how! Her Hedda is an artful, perfectly manicured, two-faced ice queen. Never has poison been spat so melodiously and with so sweet a smile. Yet, despite her steely self-control, the deep resentment she tries to contain is ever present, boiling over into venomous outbursts, and her powerlessness and ultimate vulnerability wins our pity.

Adrian Scarborough, currently appearing in ITV’s Mrs Biggs alongside Smith, as her father (bit weird? It's fine, just go with it), is perfect as Hedda’s lovely but slightly ridiculous scholar husband George. His reaction to the news of her pregnancy at the crux of the play is a joy, his puppylike enthusiasm mounting into outright hysteria in the space of a few lines, oblivious to his wife's despair as he canters round the room like a labrador with mental problems.

Lez Brotherston’s gorgeous set deserves a mention too: a lavish mansion of marble and glass, beautifully lit by Mark Henderson, full of flowers and rich furnishings, Hedda’s prison is exquisite, but a prison no less. Not sure the piano and strings that kicked in at emotional moments were entirely necessary, but heigh-ho, each to their own. Little could take away from the fantastic acting on display here, tightly drawn together by director Anna Mackmin into a sumptuous production that powers on through at a neat two hours thirty. Think we can safely promise you won’t check your watch once.