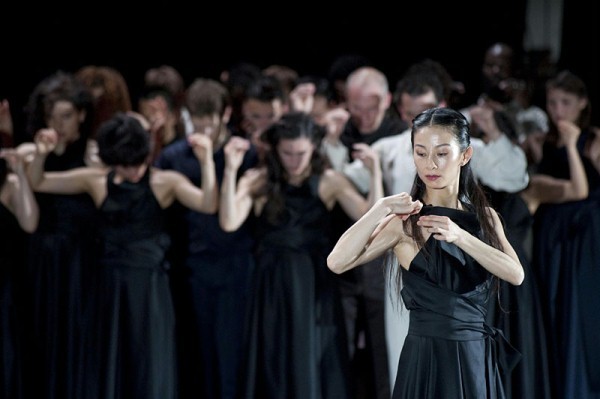 German choreographer Sasha Waltz is not yet well-known in the UK, despite a catalogue of award-winning works created on the continent since 1993. This weekend saw the British premiere of her 2010 performance work Continu, itself developed for the theatre from two earlier site-specific works created for the Neues Museum in Berlin and Rome's MAXXI Museum of Modern Arts.

That Continu was initially created with both visual art and architecture in mind is immediately visible from Waltz's careful spatial structuring. The piece owes much to the visual language of Bauschian Tanztheater — mass choral movement, sequences based largely on gestures, arms twining and feet treading in unison. Dancers are dressed in dark costumes and dark metallic plates box them in on three sides; the atmosphere is industrial, institutional, cell-like.

Opening with a furious burst of percussion, played live onstage by Robyn Schulkowsky, Continu then settles into its central portion, an ensemble for 24 bodies danced to the music of Edgar Varèse. There's more than a hint of Stravinsky's Rite of Spring to Varèse's music, with its onerous string stabs and thumping timpani; and there's more than a suggestion of ritual to Waltz's choreography. Dancers run in circles, an anonymous mass of primal bodies; they break into duets which instantly dissolve, searching for some connection which never materialises. Bodies huddle together, pacing out tribal rhythms on the stage floor; occasionally a dancer will break loose for a yearning solo at the front of the group, before being absorbed back into the mass. Sudanese dancer Justin Billy's solo is fantastically frenetic; Niannian Zhou's is more lyrical and otherworldly, performed with beautiful unwinding arms and blossoming fingers.

The second half is lighter and brighter — now in white, and dancing to the happier strains of Mozart's Oboe Quartet, the performers pair up for buoyant lifts. If the narrativeless Continu is about anything, it is about the eternal forces — positive and negative, real and imagined — that push us onwards, upwards and sometimes downwards. Really, however, it's about those striking visual images and arrangements in space, the use of the body as a kind of architectural tool as much as a social being.

Continu is clearly realised and exuberantly performed by its 24-strong international company; its best moments, both lovely and provocative, linger long in the mind. It is, however, a difficult piece to engage with in some ways — on the one hand, formally abstract and often academic in structure, it lacks the humanity of Pina Bausch; on the other hand, often messy in the unison it lacks the breathtaking formal precision of Anne Teresa De Keersmaeker. We love the ambition of an evening-length work for a huge body of performers, but we couldn't completely love the performance.