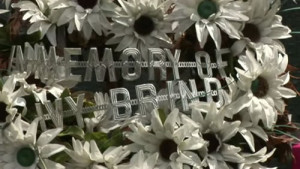 Whatever your plans for more unusual Saturday night activities, we’re willing to bet they don’t usually involve Barbara Windsor, Matt Lucas, the world premiere of a new requiem, or hanging about in a London cemetery.

But this Saturday you can combine all the above as composer Benjamin Till’s new classical work The London Requiem will be performed live in Abney Park Cemetery in Stoke Newington.

But don't worry - this isn't a duet between Babs-as-Peggy and Mr Matt Lucas. They'll be joined by the Rebel Chorus who'll gather at dusk, along with assorted musicians, to perform Till’s choral composition in the cemetery. A classical piece in 10 movements inspired by Londoners who have passed away, the music was largely written in graveyards and cemeteries around London. The traditional Latin text is augmented with quotations Till found on memorials and gravestones.

Till says, “I was struck by the simplicity of so many gravestones and how they are dominated by clichés.” But, after reading one saying “Be Kind; for everyone you meet is fighting a hard battle” his feelings towards these epitaphs changed. “I thought about the difficulty of expressing all the love and emotion those inscriptions try to summarise. The epitaphs are the ultimate tweet – just a few words to sum up the feeling of an entire life”.

If you can’t make it to Abney Park Cemetery, you can still experience the performance streamed live on The Space at thespace.org. In addition to the premiere, there are films and audio about the background to The London Requiem, as well as an audio diary by the composer. (Plus loads of other cool stuff – we apologise if you waste spend the rest of your afternoon enjoying more Space-based nuggets. It really is an culture geeks' online treasure trove.)