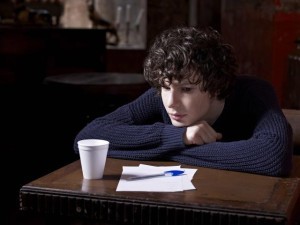 Sunday: Simon Amstell (pictured) is doing a three-night run of his nationwide tour Numb at the Invisible Dot. We loved this show, so snap up tickets while you can (7.45pm, £10).

Tuesday: We can't choose between these two gigs; sorry. We can't do everything. So pick from Bright Club at the Wilmington Arms, headlined by the very dry Mike Wozniak, compered by Ivo Graham and featuring academics talking about tiny things, from the fields of nanoscience to energy (7.30pm, £5). Alternatively, head to the Black Heart in Camden where Chris Coltrane hosts a night of Lolitics with Robin Ince, Tony Law and Hils Barker (8pm, £3).

Wednesday: Get a load of Checkley and Bush's sketches and characters at the Leicester Square Theatre (8.30pm, £10).

Friday: If you've never been able to get into Quincy's Comedy Lounge when it's at Stratford Circus, there's more space as the show celebrates its fifth anniversary with friends at the Bloomsbury Theatre tonight (8pm, £15).

Saturday: Compressedfest crams the music and comedy of a festival into one day at the The Miller, near London Bridge. Providing the laughs are Josh Widdicombe, Sara Pascoe, Lewis Schaffer, Dan Schreiber, Ria Lina, Ian Smith and plenty more (starts 1pm, £12 / £15).

Book ahead: Tickets for Robin Ince's incredibly popular Nine Lessons and Carols for Godless People at the Bloomsbury Theatre went on sale yesterday. Dates are 16-20 December and guests include Josie Long, Stewart Lee, Richard Herring, Joanna Neary, Isy Suttie, Darren Hayman and many, many more. You can also get tickets to see Sarah Millican at the tiny Hen and Chickens Theatre on 25 and 26 September; they're on sale at 11am on Friday.