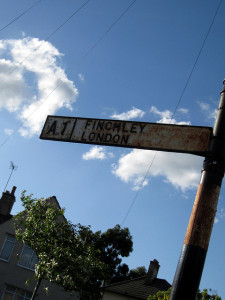 The word on the street is that the altercation involved Helen Michael, the Finchley cafe-owner who was one of the people campaigning against Coleman during May's election. Barnet business owners are extremely unhappy about parking changes which they say have badly affected their trade. Coleman was equally unhappy about their 'Sack Brian' campaign and was filmed shouting at shopkeepers demanding they take down posters. He eventually lost his Assembly seat to Andrew Dismore.

This hasn't been a good year for Coleman. In March he was told to apologise to residents after saying one would have been a member of the Blackshirts in days gone by, and calling an Israeli "disloyal" to his country. Never one to take a dressing down lying down, instead of writing the apology Coleman appealed, which a judge refused last month. Coleman had 28 days within which to appeal that decision or apologise; those 28 days ran out this week.

As well as losing his Assembly seat and with it the role as head of the London Fire and Emergency Planning Authority, Brian lost his Barnet council cabinet position. Within a week his salary dropped from over £100,000 to £14,000 (though a £30k pay-off from City Hall will soften that blow a little).

None of this has dampened Coleman's fire. Just last week he caused a furore after gleefully responding to heckles from members of the public watching a Barnet council meeting with "I know the sad, mad and a couple of old hags are in the gallery", for which he refused to apologise. (Anyone sensing a theme?)

Coleman has been bailed to re-appear before the police in October. An already miserable year is turning even worse, but at least he has his blog to console himself with.