The Peckham Peace Wall, One Year On

By SallyB2 Last edited 120 months ago
SallyB2 The Peckham Peace Wall, One Year On 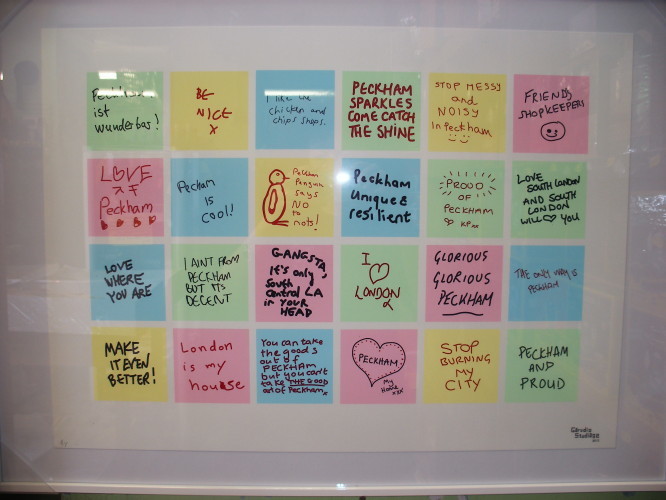 On the 8th August 2011, following the death of Mark Duggan at the hands of the police a few days earlier, Peckham became one of the five or six town centres in London to be afflicted by riots the like of which England has seldom seen. We wrote about it here: it was, frankly, terrifying.

But the next day the town picked itself off, dusted itself down, and thus began an outpouring of civic love and area pride again the likes of which are rarely allowed to show in this stiff-upper-lip nation of ours. The Peckham Peace wall was organised by Peckham Shed and started as a modest outlet for people's feelings following the riot: it quickly became a (inter)national emblem for the strength of spirit shown up and down the country during August last year.

By public request the 'wall' of post-it notes was preserved behind glass, and has now found a permanent home on Peckham Square. The installation will be unveiled on Wednesday 8th August at 5pm. Exactly one year on. To commemorate the event, and to accentuate the positive, Garudio Studiage have made a limited edition print of some of the messages: the proceeds will be ploughed back into community arts projects. You can view the print (pictured above, price £68) in local shops and buy it through Peckham Space.

Later in August (on the 19th) there will be a Peace Festival in the town square. Expect live music, arty things, food and lots of hugs. The event will run from 12pm - 6pm.