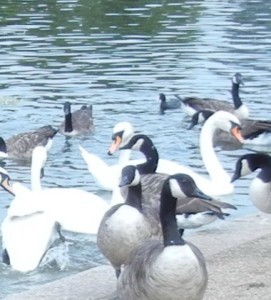 The Serpentine, mid-afternoon. Two geese sit on the grass in the shade of a tree near the water, dozing in the warmth.

BARRY: Quiet, eh? Where is everyone? Haven't seen any posh swans a while now. Nice to have a paddle without a longnecked Swan Princess hissing at you for drifting near her cygnets. They're aggressive when they're riled up, proper territorial.

NIGEL: All the swans with kids have been took out of town by some swan charity. Swan Lifeline, that Eton-based gang, got 15 of the Sloaney swans in full bed and board, in Berkshire. Nine are cygnets but still, that's very generous.

BARRY: Blimey, turned out nice for them. But they'll miss the Olympics - the triathlon and open water marathon is going to come right through here.

NIGEL: That's why they've all been moved, so they'll be out of the way when the action starts. You know what they're like - won't move for a film crew in a speedboat or budge for a Team GB swimmer. They'll just do that hissing thing and flap their giant wings. [Nigel does an impression of an aggressive swan. A small child nearby shrieks and he stops abruptly, then settles back down]

BARRY: They do like to show off and make a fuss. Probably do it on purpose too, if they knew they'd be on the BBC or some international broadcast during the competitions. I don't mind they're out of here, to be honest.

NIGEL: They'll be back after the Olympics though. Right fuss they'll make of that too. Everyone involved expects it to be a challenge, getting them back here. They want to be put back exactly where they had their nests. And all the single swans who got left behind are going to be well sniffy at the families who got a free holiday while they got left behind... it's going to be a bit tense.

BARRY: Heh. Good luck to them. That Marion, the one with five cygnets, she'll be a handful. There'll be a fuss alright. But at least the races here will go smoothly.

NIGEL: I know I'm not going anywhere near the action. Going to watch from a distance, that's what I'm going to do. I'm a goose, I don't look for trouble.