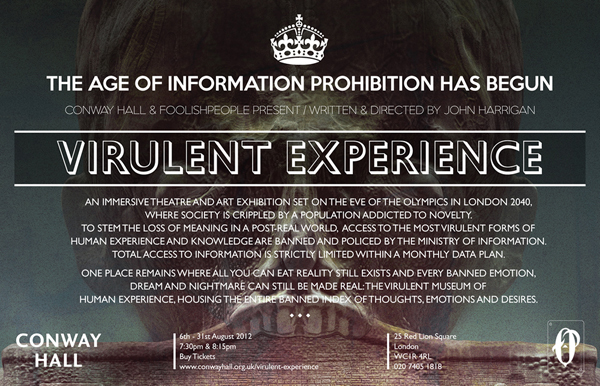 Fans of twist-laden dense drama like The Prisoner, Lost and Fifty Shades of S&M will want to dive into new immersive theatre show Virulent Experience at Conway Hall. Devised by the Foolish People, the plot which explores the social and political issues behind control and conscience raises more questions than answers.

Yes, really. We start on relatively familiar ground: it’s the eve of the London Olympics, 2040. While the eyes of the world are focused elsewhere, brave audience members are asked to tour the Museum of Virulent Experience where an ambitious government project is just about to go a little bit awry.

Thankfully, that could never happen in reality. Do I have anything to worry about?

The Ministry of Information’s Emotional Experience Act means that, through the power of implants, all disruptive, antisocial and negative emotions and rogue experiences are now banned throughout the UK. BLAKE watches over the population, monitoring for signs of dangerous “Virulent Novelty” which are captured and archived in the Museum. BLAKE, though, has started to exhibit strange behaviour which could affect everyone.

So far, so Michael Crichton. Who or what is BLAKE?

That’s all part of the mystery, one that takes in the Black Farm, Sure Heart technology, curious engrams and an emotional aptitude test for all Museum visitors.  Be prepared for a very wordy start with exposition and speeches aplenty laying the ground for what is to come.

How immersive is this?

The story takes us into and around Conway Hall, exploring every nook and cranny as the audience is initially led promenade-style from one set piece to another. Tempers fly on the roof terrace, secrets are spilled in the office and down in the murky basement, one “cleansed” patient provides a shadowy soliloquy. Other areas to explore include the main hall, a lab and the library each with their own part to play in this multi-faceted tale. Oh, and not everyone is as they seem…

Does the story end well?

While this is definitely not the case for all of the characters, the audience gets to grind to a true funk/rock classic that everyone should dance around naked to at some point in their lives (we advise trying this at home). After the plot resolves itself, the story is re-run twice more on the night. There are no plot holes, just unseen episodes, so go explore and find areas and scenes you may have missed the first time around.

Virulent Experience runs until 31 August. More information can be found on Facebook or the Conway Hall website. Performances start at 7.30pm and 8.15pm, tickets cost £20 / £15 or 'pay what you can' on Tuesdays.