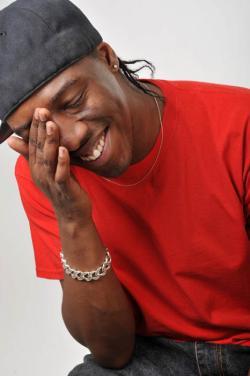 Nathan Caton @ Camden Head
In a tiny and improbably warm room like the one above the Camden Head, it seems like a comedian wouldn't really need to use the microphone. Said room can fit perhaps a classroom's worth of sweaty people in there so when Nathan Caton sets it aside and just talks to the audience, it's like a barrier has been pulled down. Not quite the Berlin Wall, but it's something.

And it fits in perfectly with his amiable, chatty set. It's still a work-in-progress at the time of writing but it'll go by Teenage Mutant Nathan Caton by the time it hits the Edinburgh Fringe. The loose thread running throughout is that of a family history told in fond anecdotes; Caton's material tends to be a little benign for some tastes, but the material in T.M.N.C. baits and switches with stereotypes of the black community.

And it's funny! Which seems like the only thing you could actually say about a comedy show: whether it's funny or not. Caton has a talent for physical comedy and wordplay, along with the warmth of character to make it work for him. So that's pretty much the review: the show is funny.

Caton was only in the Camden Head for one night (which we just reviewed) but if you're taking a trip to Edinburgh, try to go and see it.

By James Drew. Nathan Caton was on at the Camden Head. Find out where else you can see him on his website.

David Morgan: Pretty @ Camden Head
After a couple of weeks of the Camden Fringe, watching David Morgan bounce onto the stage above the Camden Head is slightly overwhelming at first, right up to the point where his energy infects you somewhere around the time he goes on about how "wide" he is. He draws you in with his magnificent hair and then talks about two ridiculous incidents that have shaped his self-image with such coherence and insight that Pretty feels like a series of inside jokes among friends and it quickly becomes obvious it's all actually going to add up to something by the top of the hour.

Then it does and it's awesome. Does a comedy show need to have a point? No. But it's better when it does.

Staffroom @ Tristan Bates Theatre
If you thought audience participation was limited to comedy, think again. This play about teaching at a school for kids who've been kicked out of mainstream education breaks the fourth wall at several points, and those with bums-on-seats suddenly find themselves part of the action. (If this sounds like your idea of hell on earth, sit next to the wall and avoid the front row.)

It's an interesting gimmick for an interesting concept, based on writer/director Rachel Creegar's real experiences working in a similar unit. This probably explains why the comedy sometimes gives way to expositional dialogue about child protection procedures, but the cast are engaging enough to carry it off. Aussie Matt Abercromby stands out with an easy, charming performance that hints at deeper troubles. Slow, dragging scene changes do the play a disservice though; if the staging was as playful as the interaction the whole thing would flow much easier.

By Rachel Holdsworth. Staffroom is on until Saturday 25 August, 7.30pm at the Tristan Bates Theatre, 1a Tower Street, Covent Garden. Tickets £10 / £8.