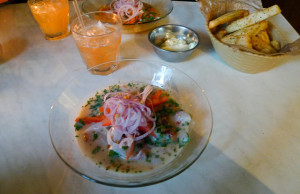 Cast your mind back to the Good Old Days — longer than two weeks ago, when we were still crap at sport and good at music — to a time when the concept of a "pop-up" restaurant was an enticing opportunity to try some original cuisine in a novel location, cooked by people who cared about what they were doing. It seems a dim memory in these days of corporate sponsored tourism cash-ins at soon-to-be restaurants, where high standards and low prices switch all too easily.

Thankfully, The Last Days of Pisco bucks that trend, taking a refreshingly pared-down approach to the current vogue for all things Peruvian by providing face-puckering ceviche and knee buckling cocktails as they continually move about town (they'd taken over an Italian cafe, Beppe's on West Smithfield, when we visited on a balmy Friday evening). The crowd outside were wise to plump for the traditional Pisco Sours (£8) which were dangerously moorish, although the more adventurous of the patrons would be rewarded for trying the Piscopalian, a take on the Negroni that would rival Franks.

Thankfully for the indecisive, who know that a broad menu can open the door to misery and regret, there are only three choices here, all of them ceviche, each £10. The dishes uses either aji amarillo or rocoto chilli as a base, paired with sustainably sourced seabass and a limey soup of tomato, ginger or orange, for which the chunky Yuca chips (£5) were a substantial accompaniment.

Pudding comes in the guise of what appears to be a disappointingly small ketchup cup of salted dulce de leche, studded with tiny fragments of peppercorns. Be warned, you may have to stop yourself trying to eat the paper cup to get the last tasty morsels from its folds.

A dinner for two - by which we mean four cocktails, two ceviches, a side and two desserts - came to £60. You won't feel like you're in a pop-up. And whilst the Smithfield joint has packed up and moved on to Dalston for now (there's a set menu for £12.50 this Friday) we hope this won't be the last days of The Last Days of Pisco. Follow them on Facebook or Twitter to see where they wind up next.