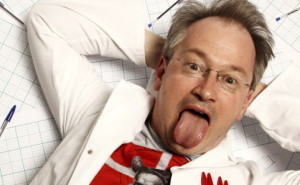 London’s comedy scene has decamped to Edinburgh, but there are still good gigs on

Sunday: There's topical sketches and songs at the Canal Cafe Theatre with the News Revue team (9pm, £10 / £8.50). It's been going for 11 years, they're clearly doing something right.

Monday: He's recently made the jump onto TV panel shows, and tonight Nathan Caton's trying out new material at the Camden Head (6.30pm, £5; part of the Camden Fringe).

Tuesday: Our Joel really, really wants you to see Jamie Glassman's Tony Izzet and Friends at the Black Heart. Your last date to see this character comedy is tonight (8pm, £6 / £5; part of the Camden Fringe).

Wednesday: Frankie Boyle is doing a work in progress show at Hen and Chickens Mon-Wed this week. Tickets go on sale at 11am the day of each show (9.30pm, £5).

Thursday: There are two chances to see the latest show from Robin Ince (pictured) take shape at the Camden Head tonight, at 6.30pm and 8pm (£7.50; part of the Camden Fringe). Always passionate, clever and marvellous, he's one of Londonist's favourite comedians.

Friday: The one time we saw Michael Fabbri we learned an awful lot about the man's penis. Maybe you'll be similarly lucky at The Comedy Store. Sean Meo, Curtis Walker, Ian Stone and Mike Gunn may or may not talk about their genitalia (7.30pm, £20 / 11pm, £15 / £10).

Saturday: Kerry Godliman, Josh Howie and Prince Abdi have sets lined up at the 99 Club in Leicester Square (8.30pm, £12 online).