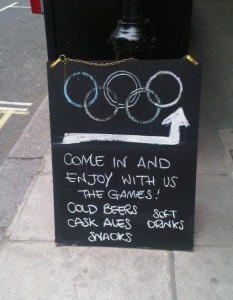 If lots of people have fled London for the Olympics it can only mean one thing – more beer for the rest of us. There are plenty of medal-worthy festivals taking place this month, not least the epic Great British Beer Festival.

Queen of Hoxton, Shoreditch. In a fit of meteorological optimism the Queen of Hoxton are staging an International Beer Day on their excellent rooftop. Pray for sunshine because it sounds well worth a visit: there'll be a range of craft beers and ales, a beer pong tournament courtesy of the Social Athletics Club and lots of other entertaining pub games. The London Fields Brewery will also be on hand with beer specials, and a beer-infused BBQ will be running for those that need to refuel. The event runs from 12pm-8pm and entry is free.

Great British Beer Festival, Olympia. This is the big one. Join a predicted 50,000 visitors for this mammoth festival, which boasts over 800 beers and a great atmosphere. This is a fantastic chance to sample a huge variety of real ales, ciders and foreign beers, and if you need a break there's still all the fun of the food stalls, live music and Thursday's 'hat day' to contend with. See our preview for full details.

Dovetail, Clerkenwell. Their Belgian beer festival promises a variety of food and beer stalls, which will be manned by experts offering free samples. Beers such as Westmalle Trappist, Mogozo fruit beers and Bruges Zot will be on offer, and you'll also have the chance to win prizes such as a trip to Belgium.

Dove, Broadway Market. The Dovetail's Belgian beer festival moves to its sister venue for a second day of fun.

Red Lion, Isleworth. Over 50 real ales, ciders and perries will be on offer, alongside live music on Saturday, Sunday and Monday.

William IV, Leyton. From 11am til late throughout the bank holiday Brodies Brewery will be celebrating its fourth birthday. Over 40 beers will be available at the usual low prices, alongside live music, brewery tours, pub games and a hog/lamb roast.

Edinboro Castle, Camden. The pub has divulged few details about what beers will be on offer at their festival, but given that their usual line-up is fairly respectable you're bound to be in good hands. There will be a 50p discount for CAMRA members, as well as a £10 ale and burger offer.

The London Theatre, New Cross. South East London CAMRA are hosting a mini beer festival from 11am-10pm on Saturday and Sunday. They'll be offering a wide range of thirds taken from bottled beers, as well as a few ales on tap. One other attraction on offer is London Glider, a cider whose apples are sourced from London orchards. There will be soft jazz played during the evenings and the entry fee is £3, or £2.50 for CAMRA members.

Extra beer-y goodness: If you're looking for something slightly more structured than a festival, the events from the Craft Beer Social Club look like they're worth a try. For £24 they give you the chance to taste up to 15 British beers from a robust list, accompanied by guidance from their experts and the chance to relax on Paddington Green's Terrace Bar.