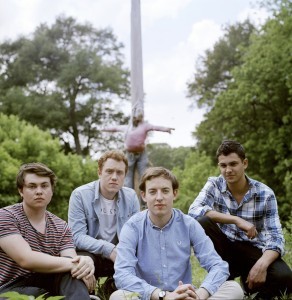 Bombay Bicycle Club have had an amazing year with a 10,000 strong homecoming gig at Alexandra Palace and opening for Blur at a sell-out Hyde Park. So it is fitting that they have been given their biggest festival slot to date with an evening slot at this weekend's Reading Festival.

The Crouch End four-piece have become bona fide indie rock stars by traversing the leftfield with wonderfully disjoined rhythms, dance floor outsider anthems and a commitment to innovation. They even bravely released an acoustic record, Flaws, as their second album.

While preparing for the 20 minute journey from Paddington drummer Suren de Saram took time out to speak to Londonist about their Reading Festival show which will include brand new material.

How does it feel to be playing the London area’s biggest festival- Reading and what can we expect?
We can't wait. It's probably the festival we've been looking forward to most all summer. We've played there four times before and all four have been really memorable — I'd say all of them are definitely up there among the best gigs we've ever done. We've got quite a high slot this year and there are probably some people that are surprised by that, but we're just going to do our thing and make sure we give it our all. We'll be playing a brand new song as well so look out for that.

What memories do you have of playing or going to festivals?
Most of them are actually from Reading as it happens. The first time we played in 2007 and our set from last year are the ones that stick out for different reasons. When we played in 2007 we hadn't even done very many gigs beforehand and we were first on in the Carling tent, so we weren't really expecting many people to come and watch us. We thought most people would still be sleeping, but as it turned out the tent was completely rammed and I just remember us all looking at each other throughout the set and grinning as we couldn't believe what we were seeing. We'd never experienced anything even close to that.

We played Leeds the next day and then came back to Reading for the Sunday, where over the course of the day I managed to drink a whole bottle of whiskey, eventually lost my friends so decided to go on all the fairground rides on my own, then ended up throwing up on a security guard and getting chucked out of the festival. Definitely one of the lower points in my life.

Do you prefer playing to a festival audience or you home fans back in London?
Our London gigs are always special for us. A festival can go either way. Sometimes there might be a lot of people there that don't know your music so you have to try and win them over which can be difficult, but when a festival goes well and you've got a large crowd that knows your songs, it's difficult to match the buzz you get from that. A lot of our best gig memories have been festivals.

Who would play at your fantasy festival?
I'll assume they don't have to be alive...
Arcade Fire
The Beatles
Bon Iver
Michael Jackson
Radiohead

Who are you looking forward to seeing at Reading if you get chance?
I would have loved to see Foo Fighters, but unfortunately they're playing different days so it's not going to work. I'll definitely be checking out our friend Lucy Rose on the Festival Republic stage and then maybe stay to watch Alt-J as I've heard good things about them. After we've played I'll probably be splitting my time between The Maccabees and The Cure.

2012 has been an incredible year for you, with Ally Pally and Hyde Park gigs, what are your future plans?
There are a couple of festivals left after Reading and Leeds and we've got a US/Canada tour after that. Our last bit of touring for this album will be in Australia over New Year- anice way to end-and we'll then start recording our new album.